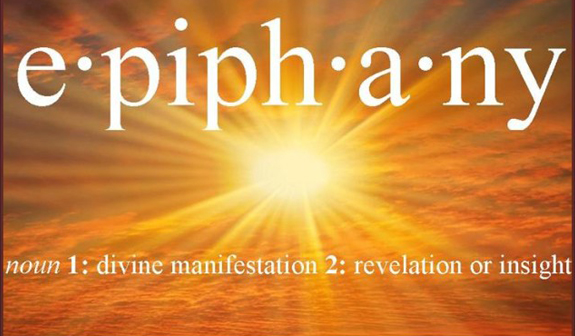 Today is Epiphany. It is also my daughter’s 27th birthday. Happy Birthday, Honey, and save me a piece of the Oreo Ice Cream Pie!

But, back to Epiphany.   Epiphany means “manifestation”, as in, a manifestation or appearance of the divine. On the church’s liturgical calendar (which begins, by the way, with the first Sunday of Advent), Epiphany comes twelve days after Christmas and celebrates the visit of the Magi to Jesus as a divine “manifestation” to Gentiles. To say that the church “celebrates” Epiphany is a bit of a stretch. Okay, it’s a big stretch, at least in my neck of the worldwide woods. (Some countries do a major and very cool observance of this festival, complete with gifts and special foods, donning traditional dress, dancing and singing. Now, that’s celebrating.)

The story of the Magi has many layers, but “joy” is a prevalent theme. After a long and treacherous journey and an encounter with Herod that could have ended badly (i.e., “deadly”) but miraculously didn’t, the Magi are literally overjoyed to see Jesus face to face. The text in the Greek is awkward, but the gist is that “they rejoiced a great joy very much.” Because we don’t really understand the context, we miss how remarkable their response to the Christ child was. First, the Magi were Gentiles, meaning they weren’t part of the people who had been promised and were expecting a Messiah. Why would someone else’s Messiah be so important to them?

Second, what, in actuality, were they seeing? A toddler of economically limited means, in modest surroundings, lying in a teen mother’s arms. There were no outward signs of prophetic confirmation in this scene, nothing to indicate that the promise of salvation for the world resided with this child, yet the magi were deliriously happy to be in his presence. They fell to their knees to worship him and offered him precious and costly gifts. Why would they do this? Why did they humble themselves before a child and his young, peasant parents? It seems they knew some profound truth that could not be seen just with the naked eye. Indeed, it took eyes of faith to see it.

All of this has caused me to think a lot about worship. I look at our culture—how fans (including me) go absolutely nuts because their team scores a touchdown, or a pop idol raises the roof at a concert, or The Force Awakens finally debuts in theaters. When we are exuberantly thrilled about something we jump up and down, shout until we’re hoarse, dance, raise our arms in the air and shriek in delight. We literally can’t contain our joy.

How much of our worship is joyous like that? There is, certainly, a place for lament and confession and tears in our worship. But, if our worship is routinely devoid of joy, are we sure we’re worshiping the God who is with us, Immanuel? The Magi weren’t concerned with “getting it right.” They met Jesus, and they did the most natural thing in the world: they fell to their knees in adoration, full of the joy of the Lord. O, Church, may it be so with us.