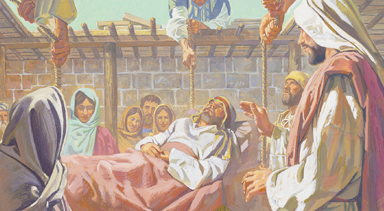 There is a powerful story of friendship in the Gospel of Mark. A man is paralyzed and his four friends are so convinced that Jesus can help him that they put the man on a pallet, each grab a corner, and cart him off to a house where Jesus is inside teaching. The only problem is that the house is jam-packed and apparently, no one is willing to get out of the way to let these men through. That seems rather selfish—but that’s a whole other story.

The four men are not only good friends, they are also very resourceful and determined friends. Seeing all the entrances blocked with people, they devise a plan to cut a hole in the roof of the house and lower their friend through the hole and into Jesus’ presence. Talk about chutzpah! What would motivate these four to act with such audacity and gumption? First, I think it’s clear that they really cared for their friend. They “loved him like a brother” to put it in biblical language. Second, they obviously had a deep conviction that Jesus could do something for their friend that was worth all this time and effort. They truly believed in Jesus’ ability to change this man’s life—and that belief was so strongly held, that nothing was going to stop them from getting their friend to Jesus.

The friends’ love and faith combined in action with stunning results. Jesus did indeed heal the man’s legs, and he was able to stand, roll up his mat and walk home on his own—although I’m guessing he did more running, jumping and dancing than leisurely walking! But, there were also a couple of “unintended consequences” to the four friends’ actions. For one thing, have you ever wondered who cleaned up the mess that was left by digging a hole in the roof? Who fixed it and who paid for the fixing? Sometimes, faith and love acting together make a mess. Being a friend means we wade into that mess—that we’re willing to be inconvenienced, willing to put ourselves out, to work behind the scenes , take risks, and bear the cost or responsibility of creating opportunities for others to seek healing and wholeness.

In addition to the mess it created, this good deed also resulted in conflict. Jesus didn’t just heal the man. He also forgave his sins, and that really ticked off the local religious leaders. Jesus was interested in the man’s spiritual well-being as well as his physical well-being. The religious “in crowd” took exception with Jesus’ methods, and that caused a rift. Sometimes, love and faith compel us to take actions that won’t always make everybody around us happy. We certainly don’t want to initiate conflict unnecessarily, but we also can’t make avoiding conflict our highest goal either. Conflict will, on occasion, find us, and that’s part of the cost of being a friend—and a faithful follower of Jesus.

This story invites us to be a friend to others so that hope and healing can be found. It also invites us to go to God with our own infirmities of body, mind, soul and spirit, because Christ is the Great Physician who longs to give us health and life.