Saints and Sinners: The Miracle of Church 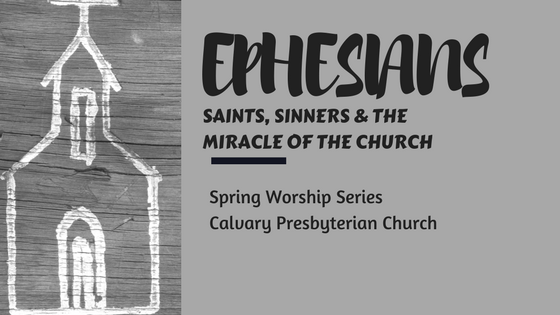 19 Apr Saints and Sinners: The Miracle of Church

Saints and Sinners:  The Miracle of Church

Wendell Berry, the American novelist, poet and cultural critic has famously observed that, “We think it ordinary to spend twelve or sixteen or twenty years of a person’s life and many thousands of public dollars on ‘education’—and not one dime or a thought on character.”

Despite their separation by 2000 years and a couple of continents, the writer of the letter to the Ephesians is clearly a kindred spirit of Mr. Berry, only instead of critiquing the American education system, Ephesians lifts up the importance of character formation and spiritual maturity in the church.  Growing up “healthy in God, robust in love,” as Eugene Peterson puts it, is a particularly appropriate subject in light of Easter and our call to be resurrection people. So it is that today we start a new sermon series on the book of Ephesians which is all about growing and maturing as people of faith.

Generalizations can be dangerous, of course, but I think it is accurate to say that in general, people in the U.S. have little tolerance for, much less practice of, a centering way of life that yields to the conditions in which growth—spiritual and personal—takes place.  Quiet, obscure, patient, not subject to human control and management—this is the fertile soil of maturity. The American church is uncomfortable in these conditions, so in the name of “relevance,” it all too often adapts itself to be indistinguishable from the culture around us:  noisy, busy, controlling, and image-conscious.

Meanwhile, what has previously been a major concern of the Christian community, becoming men and women who live to “the praise of God’s glory” has become a mere footnote to the church’s life.  Ephesians calls us back from this apostasy by centering us on the resurrection of Jesus, Jesus alive and present, Jesus’ resurrection life which we are called to practice daily.

The practice of Jesus’ resurrection life does not take place in a vacuum.  Church is the context in which we mature in Christ, but as we know, church is difficult.  Sooner or later, though, if we are serious about growing up in Christ, we have to deal with church.  So, it might as well be sooner, I’d say. Why church, you ask? The short answer is because the Holy Spirit formed the community of faith to be a signpost of God’s eternal life and love in the midst of our everyday lives.  In other words, church is what provides human witness to the Kingdom of God and is its physical presence in the world.

It is easy to dismiss the church as ineffective and irrelevant, and many people do.  It is easy to be condescending of the church because so many who make up the church are not very impressive by cultural standards of success.  It is common to become disillusioned with the church because expectations—of the pastor, the programs and worship and mission, and the other members—will eventually be disappointed.   It’s obvious that we are not a utopian community. We are not God’s avenging angels. We are not making much headway in eliminating what is wrong in the world. And, we haven’t been so good at our job that everyone is clamoring to get in, either.

But, do you suppose, is it possible that the church we have right now is exactly what God intends because this imperfect church provides the very conditions and proper company for growing up in Christ, for becoming mature?  Maybe, just maybe, God knows what he is doing, giving us church, this church.

The church at Ephesus was a missionary church begun by the eloquent and learned Jewish preacher Apollos.  Paul stopped by to visit this fledgling church during his second missionary journey, met with the twelve people who comprised this tiny congregation and guided them into receiving the Holy Spirit.  He stayed on for three months, using the local synagogue as his home base for preaching and teaching. That three-month visit extended to three years during which time Paul was pastor to this Christian congregation.

There are fifteen churches named in the New Testament.  All but two of them, Antioch and Jerusalem, have letters addressed to them.  The Ephesian letter is unique in that it is the only one that is not prompted by a problem of either behavior or belief which has led some scholars to wonder if it was a general letter that circulated among a number of first-century congregations.  The lack of a mitigating issue allows Ephesians to explore what gives church its unique identity, namely, God’s glory. Ephesians is clear that church is not what we do; it is what God does, although we participate in it.

This idea goes against our grain:  church, the spiritual life, and mission all too often become what we do—our activity, our action, our feelings, our preferences, our emotions, our beliefs.  Ephesians orients us toward God and what God has done for us in Jesus Christ. The letter gives us an inside look at the operations of the Trinity that are foundational and invisible beneath what is visible among us.  This is what makes us what we are, however imperfectly we are living it out.

At the center of Ephesians there is a single Greek word, axios, on which the letter pivots.  It’s the word translated as “worthy” in 4:1: “I therefore, the prisoner in the Lord, beg you to lead [or walk] a life worthy of the calling to which you have been called.”  Axios is a word with a picture in it.  An axios is a set of balancing scales, the kind formed by a crossbeam balanced on a post, with pans suspended from each end of the beam.  You place a one-pound weight on one side and then measure out, let’s say, flour, into the other pan until the two pans are in balance.  The two items, the weight and the flour are balanced, in equilibrium. They are different—a weight and flour—but they are axios, worthy.

The items balanced in Ephesians’ scales are God’s calling and human living.  When God’s calling and our walking are in balance, we are whole; we live maturely, responsive to God, congruent with the way God calls us into being.  We are mature, healthy, robust. We are worthy.

The response to God’s calling is walking.  Walking is what we do. We follow God’s call.  We respond with our lives. We don’t start out by thinking about God.  God is not an idea, and the Bible is not a book we carry around and read for information about God.  It is instead a voice we listen to. Calling comes into our ears, inviting us into the future, bringing us into a way of life that has never been experienced in just this way before:  a promise, a new thing, a blessing, our place in a new creation, resurrection life.

It’s not unusual for us to start out looking for information about God.  But as we mature we move into a more personal, intimate language with God.  But even as it becomes more personal, it also becomes more inter-personal.  Others are also hearing God’s calling and are responding by walking. This company of called fellow-travelers, all different and all one, is the church.  The metaphor throughout Ephesians for the church is the human body with Christ as its head, “the body of Christ.” Everybody different but everyone connected.  Dynamic diversity and harmonic unity—“joined and knit together by every ligament.”

Common worship, by which I mean, corporate worship provides the basic form and content for practicing resurrection life and growing up in Christ.  As lovely and wonderful as moments of solitary worship on a beach or wandering in a garden or sitting on the top of a mountain are, these will not lead us to maturity.  Ephesians does not give us the option of excluding others from our worship or worshiping selectively with only those who are like-minded. Maturity develops as we embrace in worship and friendship those who are friends of God, not just those who are our preferred friends.  Worship shapes us not only individually but as a community, a church.  If we are going to grow up in Christ, we have to do it in the company of everyone who is responding to the call of God.  According to Ephesians, whether we happen to like them or not has nothing to do with it.

What God did, in fact, do was to give us the miracle of Jesus, a miracle that came in the form of a helpless infant born in poverty in a dangerous place without understanding or support from the political, religious, or cultural figures of his day.  Jesus never left that world he had been born into, a world of vulnerability, marginality and poverty.

God gave us the miracle of congregation the same way he gave us Jesus, by the descent of the Dove.  The Holy Spirit descended into the womb of Mary. Thirty or so years later the same Spirit descended into the collective spiritual womb of men and women who had been followers of Jesus.  The first conception gave us Jesus. The second conception gave us the church.

It was a miracle that didn’t look like a miracle, a miracle in the form of the powerless, the vulnerable, the unimportant—not so very different from any random congregation we might Google on the internet, and not so very different from our own congregation.  We are the saints to whom Ephesians is written. We are the saints in whom and through whom God chooses to be present to the world. There are no “successful” congregations in Scripture or in the history of the church. There are only sinful and flawed, but forgiven, women and men who gather for worship, who hear the call of God and respond by walking, people who are maturing in Christ, people in whom the Spirit of God has been let loose.  May it ever be so. Amen.