Dare to Reach Out and Help Your Neighbor 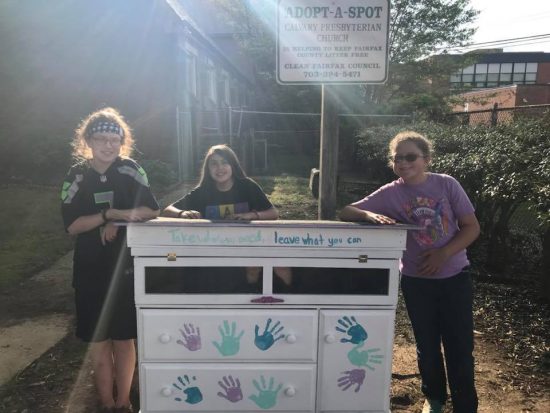 06 Jun Dare to Reach Out and Help Your Neighbor

Last week I wrote about the ongoing challenges we face as individuals and as a congregation to meet the needs of our neighbors.  It just so happened that after I wrote that post, two additional incidents occurred. One of them involved a middle-aged man who attended worship on Sunday, but who used it as an opportunity—before, after, and even during the service—to ask congregants for money.  This has happened before, and we have a protocol in place for handling exactly these kinds of situations. Our ushers were unfailingly kind and compassionate while also holding firm the boundaries that respect our time and space of worship.

The other incident is worth highlighting in detail.  One of Calvary’s elementary school students, a fifth grader, worked with two of her fellow Girl Scouts to design, build and install a Little Free Pantry.  The girls were pursuing their Bronze Award, and they initiated this project as one that could address hunger in their local community. After installing the pantry near the bus stop that sits at the edge of the church’s front yard, they stocked it with canned goods, individually-wrapped toiletries, and non-perishable food items.  An official ribbon-cutting ceremony was held, and the pantry was declared “open for business.”

I greatly appreciated the attitude of both the girls and their moms as they launched into this endeavor.  A few weeks prior, the girls had met with me to lay out their plan and ask the church for permission to put the pantry on church grounds.  They were articulate in describing their project and had clearly done their homework. The parents were equally impressive, treating this venture as a learning opportunity for the girls, regardless of how it worked (or didn’t).  With the mantra “take what you need, leave what you can” painted on the pantry, everyone was hopeful that this creative idea pulled off by three eleven-year olds could make a real difference to feed someone who was hungry.

As the girls stocked the pantry, a man standing near the bus stop noticed two resealable baggies, each containing a single roll of toilet paper.  “Are you going to give these things away?” he asked. “Could I have one of the rolls of toilet paper?” One of the scouts handed him a baggie, and he expressed his thanks.  “Wow,” I thought to myself, observing this exchange. The need is literally all around us.

I arrived at work the following morning and made a beeline for the Little Free Pantry.  I could not wait to see what, if anything, had happened. The entire pantry had been cleaned out.  We had talked about this possibility, so I wasn’t surprised, just a tad sad. I wondered if this experiment was going to be short-lived.

The girls restocked the pantry on Friday and lo-and-behold, when I arrived at church Sunday morning, some items had been taken, of course, but other items had been added by people other than the Girl Scouts.  Come to find out, news of the Little Free Pantry had gone viral via a neighborhood online group, and folks were overwhelmingly delighted to lend their support in checking the pantry and donating items to it. In the posted comments, people were obviously inspired by the girls’ desire to address hunger in a concrete way, and their vision and generosity of spirit is begetting generosity in others.

And that’s how it so often works, isn’t it?  One act of kindness, one word of comfort or encouragement, one deed of selfless service has the potential to have far greater impact than we could ever imagine.  So, go ahead. Dare to dream and dream big. Dare to reach out and help your neighbor. You never know what might happen as a result.