A Camel on the Roof 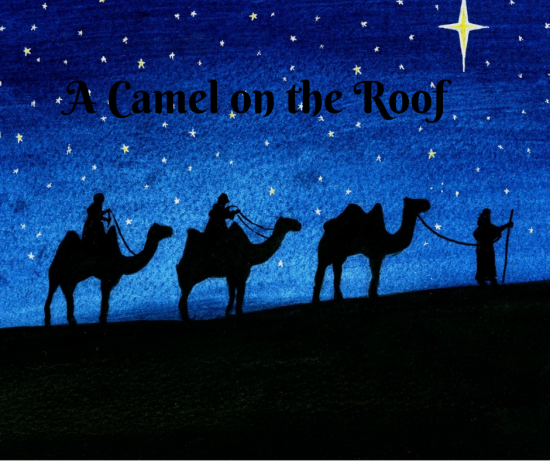 A Camel on the Roof

We begin this morning with a story from the lives of the saints—the saints of Islam, that is.  This story concerns a king of Balkh which is now northern Afghanistan. The king, named Ebrahim ibn Adam, was wealthy by every earthly measure.  At the same time, however, he sincerely and passionately pursued spiritual wealth as well.

One night the king was roused from sleep by a fearful stomping on the roof above his bed.  Alarmed, he shouted, “Who’s there?” “A friend,” came the reply from the roof. “I’ve lost my camel.”  Perturbed by such stupidity, Ebrahim screamed, “You fool! Why are you looking for a camel on the roof?” To which the voice from the roof answered, “You fool!  Why are you looking for God in silk clothing and lying on a golden bed?” The story goes on to tell how these simple words filled the king with such terror that he immediately arose from his sleep and reordered his priorities, ending up become a remarkable saint.

The camel on the roof raises the Epiphany question, “Where does one look for God?”  Or, let me get more personal. Where are you looking for God?  Both the gospel reading and the prophetic reading raise this same “camel-on-the-roof” question in one form or another.  Each text reminds us that God is not to be found where the world’s princes and powers reside. Instead, we are called to be like the king’s friend, willing to make a fool of ourselves to ask the “camel-on-the-roof” question to a world busily seeking God in all the wrong places; willing to rouse the world with the message of, “Arise, shine, your light has come, and the glory of the Lord has risen upon you!”

There is a second Arabic story that tells of a Mohammedan who died and left his seventeen camels to be divided among his three sons.  One was to receive one-ninth of the camels; one was to get half; and the third son was to inherit one-third. As we know, however, seventeen camels aren’t evenly divisible by three.  The three sons argued long and loud about what to do, as brothers are want to do. Finally, in desperation they agreed to let a certain wise man decide the matter for them. The old man was seated in front of his tent with his own camel staked out back.  After hearing the case, the wise man took his own camel and added it to the other seventeen camels.  He then took one-ninth of the eighteen, or two camels, and gave them to the first brother.  To the next brother he gave half, or nine camels. To the third brother he gave one-third, or six camels, distributing seventeen camels to the brothers which left one camel, which was his own.

I love these two stories because they so powerfully illustrate the truth that while we’re trying to find God and solve the problems of life by logical, calculating schemes that insure that we “get our fair share,” we’re missing God.  Because God is to be found not in claiming our rights but in giving; not in grasping but in opening our hearts and hands to receive from God’s storehouse of grace and mercy.

The Biblical texts are emphatic:  we have been given a light to shine in the darkness, an illumination from God that can raise the roof of the world’s kings and princes, presidents and prime ministers.  If we’re trying to find God by climbing the ladders of success, power, respectability, and making a name for ourselves, we will come up empty. God is not found in these things.

The Epiphany Good News is that God is found in the incarnation, in the humility of birth in a stable, in the vulnerability of a newborn.  The Christian message that this kind of life, marked by poverty and homelessness, suffering and death on a cross is where God’s power and glory is manifest is as startling as dis-covering a camel on the roof.  Do you want to find God? Don’t forget to look in the face of a baby. Or in the barn. Look in unexpected, out-of-the-way places, the places that would be beneath the respectable people. Look not in the palace, but in the smelly sheep pen.  Not in the corporate board room, but in the janitor’s closet.

It is to the lowly, the humble, the meek, the inconsequential that the glory of the Lord is revealed.  Glory. What is glory? Glory has been described as majestic beauty and splendor, like the glory of a jaw-dropping sunset or stunning mountain vista.  We say that we give someone glory for producing a work of art that is so unique, so timeless, it is a masterpiece. The shepherds experienced glory as a bright and powerful light when an angel of the Lord appeared to them and “the glory of the Lord shone around them” (Luke 2:9).

But the simplest and clearest definition of glory is offered by one of my favorite Christian authors, Frederick Buechner.  He says glory is God’s style.  When the Bible tells us that “the heavens are telling the glory of God” (Psalm 19:1), it is saying that they are revealing God’s style:  sunrises, starry nights, dust storms,  rainforests, butterflies, the human face—all, says Buechner, are “unmistakably the work of a single hand.”  God’s style.

Epiphany celebrates the revelation of God’s style to the magi as they made their visit to the baby Jesus.  These wise souls who were looking for God found a child who reveals divine grace and love in a bright, unique, unmistakable way.  He is a child who grows up to show us God’s style, God’s glory in everything he says and does.

Let’s say we, like the magi, also seek and find God.  What effect does that have on us? How do we experience God’s glory?  After all, light, beauty, splendor and style don’t mean much unless they have a positive impact.  It might help to remember that Isaiah was writing to God’s people in a time of deep darkness and despair, and in the midst of those harrowing times, the prophet says, “hey, don’t give up.  Don’t be discouraged. Something good is about to happen. The Light of the world is coming and when he comes, you’ll see that this Light:

It is tempting to dismiss all of this either because it is so familiar that it doesn’t penetrate our consciousness anymore or because it sounds like so much religious gobbledygook.  But, this issue of looking for God, on the one hand, and experiencing God’s light and glory on the other is a pressing, urgent need in our lives and in our world. Two recent articles in the Washington Post highlight this.  The first, which ran on October 14, was an editorial written by George Will about loneliness. Mr. Will quoted extensively from a new book by Sen. Ben Sasse of Nebraska titled, “Them: Why We Hate Each Other—and How to Heal.”  Accord-ing to the senator’s book, loneliness is a public health problem of epic proportions that is affecting individuals’ brains and bodies as well as our communities.

Sasse cites evidence that there is a growing consensus that loneliness—not obesity, cancer or heart disease—is the nation’s “number one health crisis.”  Persistent loneliness reduces average longevity more than twice as much as heavy drinking  and more than three times as much as obesity, which is often a consequence of loneliness.  Research demonstrates that loneliness is as physically dangerous as smoking 15 cigarettes a day and contributes to cognitive decline, including more rapid advance of Alzheimer’s.  “We’re literally dying of despair.”

Coming at the subject from a slightly different perspective was an article that appeared on December 16 written by three computer scientists from New York University.  The three colleagues had collected nearly 600 million posts from Twitter during 2018 to see what it could reveal about people’s deepest desires. Their findings probably shouldn’t surprise us:  more than anything else, people want to love and be loved and to be in meaningful, healthy relationships. Before concluding their report, the researchers also noted that sadly, there were many posts that expressed a desire to cry, die or disappear.

As we launch into this new year, I want to challenge us to think deeply about what this is telling us.  We assume that because people don’t beat our doors down on Sunday mornings, that they’re not interested in God.  But that’s not true. We have neighbors, co-workers, friends, even family members who are seeking something that can ground them, give coherence and meaning to their lives, that can fill empty spaces, that can speak to the ultimate questions of life, that can replace loneliness with community.  They don’t know how to name what or who they’re looking for and they don’t know where or how to get started, so they fumble around in the dark, ending up on the proverbial roof looking for a camel.

But we have a name for what they’re looking for, and we know the Light that can pierce the darkness of modern-day life.  Listen again to what the Light of the World offers. Jesus:

This is what Jesus brings to penetrate the darkness of our world.  Is it any wonder, then, that Isaiah calls us to action, exhorting us to “arise and shine” and reflect the light of Christ to those sitting in darkness?  What might that look like for you? Maybe it is to sit beside someone who is alone and afraid; or to forgive the person  who has hurt you; or to give of yourself to be community with and for one another; or to hold the hope of healing and mercy for those who aren’t able to hold it for themselves.  Perhaps before you can reflect the light of Christ, you need to examine where you are looking for God. My prayer for us on this Epiphany is that we will get off the roof, arise and shine!  Amen.