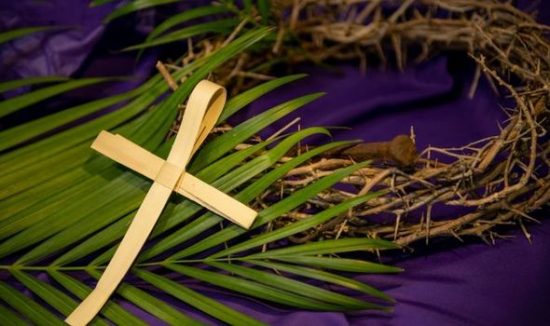 After what is without question the most unusual Lent I’ve ever experienced—and I suspect, the same is true for you—this morning we arrive at Palm Sunday and the beginning of Holy Week.  Does it feel like Holy Week to you? I confess that for me, it does not. COVID-19 has seen to that. Which leads me to think that perhaps this Palm Sunday is a specific gift, because we need to focus on the last week of Jesus’ life now more than ever.

It is, of course, a familiar story.  Jesus arrives in Jerusalem as a king.  He’s riding on a colt.  And crowds are laying their cloaks on the ground before him as he rides.  They cry, “Hosanna to the Son of David!  Blessed is the one who comes in the name of the Lord!”  The people are tired of corrupt King Herod. They want Jesus to be their ruler.

It’s easy enough for us to grasp the meaning of Jesus riding into Jerusalem on a colt while people laud him and roll out the red carpet by spreading their cloaks on the road.  Everyone is shouting, jumping and jostling to get a better view. The king, the son of David, is coming! The crowds go wild, and so do we. If we were together this morning, we’d wave our palm branches.  We want Jesus to be our king and to rule our world with love and justice as much as the Jews did.

But the Palm Sunday story is not just about a king and a colt, or a crowd and their cloaks.  It’s also about kenosis.  Kenosis is a Greek word, a word that is untranslatable.  We find it in Paul’s letter to the Philippians. It is a difficult and captivating word at the very heart of the Christian faith, yet it is much harder to understand than the meaning of king, colt, crowd or cloak.

In a magazine named Scientific American, Tim Lomas has written about the magic of untranslatable words.  He started by listing 216 of these words but found that the list kept growing.  It now stands at over 600. Lomas has discovered that exploring these foreign terms can make our own lives richer.  Think of words like the French word frisson, the German word treppenwitz (okay, maybe you haven’t come across that word lately), or words from the east, such as nirvana and tao.  We might have a vague sense of what they mean, but there are no perfect English translations.

Kenosis is one of those words.  It means “emptiness,” but has deeper significance in that it communicates the self-emptying that Jesus voluntarily offered on the cross.  And it raises a number of important questions for us as we enter Holy Week: what was accomplished by kenosis?  How did this self-emptying result in fullness?  And how can we empty ourselves so that God will fill us?  Writer Tim Lomas says that working with untranslatable words is like diving into “a deep and mystifying ocean.”  This morning I invite you to take the plunge!

For starters, what was accomplished by kenosis?  Paul tells us that Jesus was in the form of God but did not regard equality with God as something to be exploited.  In the words of Eugene Peterson’s translation of the Bible, The Message, Jesus “didn’t think so much of himself that he had to cling to the advantages of that status no matter what.”

What did this accomplish?  The text tells us that God “highly exalted him and gave him the name that is above every name, so that at the name of Jesus every knee should bend, in heaven and on earth and under the earth, and every tongue should confess that Jesus Christ is Lord, to the glory of God the Father.”

Palm Sunday would be easy to understand if it contained only the familiar: kings, colts, crowds and cloaks.  In this version of the story, King Jesus would ride into town and confront King Herod, and the one with the biggest crowd would win.  But kenosis turns our expectations upside down.  Precisely because Jesus emptied, humbled, lowered and abased himself, God exalted him and made him the king of all creation.  The result of kenosis is fullness, glory and power which is the opposite of what you would expect—emptiness, shame, and powerlessness.

But exactly how does this self-emptying result in fullness?  For Jesus, kenosis leads to glory and power because it’s based on humility and obedience.  Or, as The Message puts it, Jesus “didn’t think so much of himself that he had to cling to the advantages of [divine] status no matter what.”  He was in the form of God but chose to accept the form of a slave. That is humility.

It is a counterintuitive attitude.  Keith Krell writes, “In Lewis Carroll’s famous book, Through the Looking Glass, Alice steps through the mirror in the living room to find a world on the opposite side where everything is backwards: Alice wants to go forward, but every time she moves, she ends up back where she started.  She tries to go left and ends up right. Up is down and fast is slow. Similarly, Christianity is a kind of looking glass world where everything works on principles opposite to those of the world around us:

Keith Krell continues, “In Philippians 2, Paul explains that the way up is down.  That’s right: Down is up, up is down. The way to be great is to go lower. The logical flow of Philippians has been building up to this great truth.”

History is replete with examples of people whose humility was a defining characteristic.  A political leader like Nelson Mandela, a religious leader like Archbishop Desmond Tutu or a humanitarian figure like Mother Teresa come to mind.  Some people would point to a modern hero like Captain “Sully” Sullenberger who was at the throttle of Flight 1549 when he had to land his jetliner in the Hudson River, saving more than 150 passengers in the process.  In the aftermath of that experience, Captain Sully exemplified humility as few could.

In light of more recent events, there have been acts of kindness and heroism large and small, as medical personnel and first responders have put themselves at risk by faithfully doing their jobs to protect and provide for us; people have picked up groceries or prescriptions for at-risk neighbors; generosity has abounded to help those suffering from loss of income.   None of these people sought recognition or glory, but it comes to all of them—to some more publicly than others, but God sees and knows and will reward our acts of self-emptying, big and small.

The self-emptying of Jesus was based on both humility and obedience.  Paul tells us that “he was in the form of God but did not regard equality with God as something to be exploited.”  Instead of remaining in the safety and security of the divine godhead, Jesus entered human life the way we all do, as an infant.  “If you want to get the hang of it,” said C.S. Lewis in his book Mere Christianity, “think of how you would like to become a slug or a crab.”

That doesn’t sound appealing to most of us, but Jesus said “yes” to emptying himself and entering human life, and he did it out of obedience to his Father.  Because he humbled himself even to the point of death, death on a cross, God exalted him and gave him the name that is above every name, making him Lord of heaven and earth.  For Jesus, kenosis led to kingship.  Because he emptied himself by being humble and obedient, God filled him with glory and power.

So, how can we empty ourselves so that God will fill us?  Most of us will not be asked to follow Jesus to the point of death on a cross.  But we are challenged to show humility and obedience as we walk the path of Christ in the world.  We might, for example, open our lives more fully to others. Martin Hengel was a great New Testament historian who taught at the University of Tubingen in Germany.  He was a highly esteemed professor, put on a pedestal by many. Pastor John Dickson remembers how Professor Hengel invited his students to come to his home on Friday evenings for meals and discussions.  “He wasn’t influential just because he was a brilliant scholar,” says Dickson. “It was the fact that he let people come very close, that he shared his life with them—that humility is what made his influence lasting.”  We can show the same kind of humility, whether we are teaching, coaching a team, or leading a group of employees. It has an impact when we take others seriously and welcome them into our lives.

We might choose to serve others.  Or be generous with material things.  We might try thinking the best of others, giving them the benefit of the doubt and forgiving them when they don’t know what they’re doing.  We might pray for our “enemies”, for those who hold a different point of view or a different set of values. We might get active as a peacemaker in our family or community.  We might try denying ourselves and carrying a cross for a while. If you want to know how to experience kenosis, it requires an emptying of self.

Palm Sunday is a familiar story of kings, colts, crowds, and cloaks.  But the addition of the untranslatable word kenosis turns our expectations upside down.  The self-emptying of Jesus, grounded in humility and obedience, is the unexpected key to his heavenly fullness.  And it is the key to our fullness as well.

Hosanna in the highest!  Amen.