Advent:  A Time to Repent 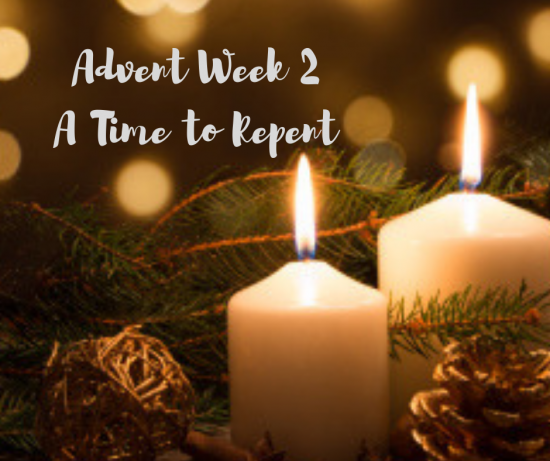 Advent:  A Time to Repent

The road, the water, the fire and the axe: four powerful symbols set the scene for where the story of Jesus really starts.

Think for a minute of a familiar sight in Washington D.C.—a presidential motorcade.  Every time the President of the United States goes anywhere, there is a lot of activity that accompanies him.  First are the motorcycles with flashing blue lights. People pull to the side of the road to get out of the way as fast as they can.  Then the large black SUV’s appear, filled with Secret Service and bodyguard types. Then, at last the limousine, flag flying and the presidential seal emblazoned on the side, containing the president.  If it is an official motorcade for some special event, the sides of the road may be lined with people, standing, waving flags, watching, hoping to get a glimpse of the most powerful man in the land.

Now take this scene back 2000 years into a hot, dusty desert.  The king has been away a long time and word gets out that he’s coming back at last.  But, how? There isn’t even a road. Well, we’d better get one ready. So off goes the herald, shouting to the peoples of the desert:  the king is coming! Make a road for him! Make it good and straight!

That message had echoed through the life of the Jewish people for hundreds of years by the time of John the Baptist, ever since it was first uttered in Isaiah 40.  Back then, it was part of the great message of hope, forgiveness, and healing for the nation after the horror of exile. God would at last come back, bringing comfort and rescue.  That, John is saying, is what is happening now. It’s time to get ready! The king, God himself, is coming back. John’s message was so striking that it made everyone sit up and take notice.  In today’s language, they saw the flashing blue lights and presidential seal and stopped what they were doing to get ready.

But the problem is that they weren’t ready, not by a long shot.  You might think your house is reasonably tidy and well kept, but if you suddenly got word that the president and first lady were coming for a visit, you might well suddenly want to give it a good spring-cleaning.  And, the Jewish people, even the devout ones who worshiped regularly in the Temple, knew in their bones that they weren’t ready for God to return. The prophets had said that God would come back when people repented, turning to the Lord with all their hearts.  That was what John summoned them to do, and they came in droves.

They came for baptism.  John was plunging them in the water of the Jordan River as they confessed their sins.  This wasn’t just a symbolic cleansing for individuals; it was a sign of the new thing that God was doing in history, for Israel and the world.  Over 1000 years before, Israel had crossed the Jordan when they first entered and conquered the Promised Land. Now, they had to go through the river again, as a sign that they were getting ready for a greater conquest, God’s defeat of all evil and the establishment of his kingdom on earth as in heaven.

John’s message wasn’t all comfort.  Far from it. He spoke of a fire that would blaze, an axe that would chop down a tree.  When he saw some of the Jewish religious leaders, the Pharisees and Sadducees, coming for baptism, he scoffed at them.  They were like snakes slithering away from a bonfire where they’d been hiding, as soon as it started to burn. The only thing that would make John change his mind about them would be if they actually behaved differently.  Going through the motions of baptism wasn’t enough. Real repentance meant a complete and lasting change of heart and life. That was the only way to get the road ready for the coming king.

So what were they to repent of?  The Pharisees prided themselves on their purity.  They knew the law and the moral code backwards and forwards; they were unlikely to be guilty of any gross or obvious sins.  But, their pride itself was getting in the way of God’s homecoming, and their arrogance towards other Jews, let alone towards the rest of the world, was not in keeping with the humility needed before the coming king.

In particular John attacks their confidence in their ancestry.  “We have Abraham as our father,” they would say to themselves. In other words, “God made promises to Abraham; we are his descendants; therefore, God is committed to us, so we are bound to be all right in the end.”  Not so fast, John warns. Your God is a sovereign creator, and it’s no trouble to him to create new children for Abraham out of the very stones at your feet. The axe is ready and waiting to chop down the tree; when the king arrives, he will bring judgment as well as mercy, and the only way to avoid the former is to show that you are a fruitful tree.  The alternative, says John, is the bonfire.

John’s stark warnings set the tone for much of the story of Jesus.  John prepared the way, not knowing what it would actually look like when God’s kingdom arrived; and John himself was puzzled at the outcome.  Later in Matthew’s gospel, in chapter 11, when John is in prison he sends his disciples to Jesus to ask him if he is, indeed, the Messiah or whether there is someone else they should be looking and waiting for.  Jesus responded, “Go and tell John what you hear and see: the blind receive their sight, the lame walk, the lepers are cleansed, and the deaf hear, the dead are raised, and the poor have good news brought to them.” (11:4-5) Jesus’ own mission was quite different from what people often imagined a new king’s mission would be. The comfort and healing of his kingdom message was balanced by the stern and solemn warning that when God comes back, absolute allegiance is necessary.  God seeks followers, not fans, in other words. If God really is God, he isn’t simply the kindly, indulgent, easy-going parent we like to imagine.

God’s judgment is a touchy, uncomfortable subject and rightly so.  Too many of us have experienced the judgments of others, sometimes in God’s name, in harsh, nasty, demeaning terms.  Our experiences don’t equate “judgment” with life-giving. In fact, we’d say those are polar opposites. Not so with the judgment of God.  God’s judgment is a necessary part of divine justice, and divine justice is always life-giving. In order for God’s kingdom to be a kingdom where love, justice, truth, mercy and holiness reign unhindered, everything else that is not those things is judged as unworthy to have any place in God’s reign.

We are so focused on the love of God, especially at this time of year, that we sometimes forget that God’s kingdom has always meant danger as well as hope.  If justice and peace are on the way, those who have twisted justice or disturbed peace are in trouble. The whole point of John’s call to repentance is that right now, there is still time to change direction, to get our act together and get in step with God’s plans and purposes.

John, and Jesus after him, clearly believed that many of their Jewish contemporaries were going in the wrong direction and pursuing a kingdom that was not of God’s making.  Too many of them were bent on establishing a kingdom of the standard variety and doing it the conventional way: military resistance to occupying forces, leading to a takeover of power.

The problem with all these movements was that they were fighting darkness with darkness, and Israel was called—and Jesus was called and then called us—to bring God’s light into the world.  That’s why Matthew links Jesus’ early preaching with the prophecy of Isaiah that spoke of people in the dark being dazzled by sudden light, a prophecy which went on to speak about a child to be born, the coming Messiah, through whom God would liberate Israel at last.  Jesus could see that the standard kind of revolution, fighting and killing in order to put an end to fighting and killing, was nonsense. And doing it in God’s name was blasphemous nonsense.

But the trouble was that many of his contemporaries were eager to get on with the fight.  John’s message of repentance was not, therefore, that they should feel sorry for personal and private sins, though he would want that as well.  John was calling the nation to stop rushing toward the cliff edge of revolution and instead go the other way, towards God’s kingdom of light and peace, healing and forgiveness, for themselves and for the world.

And what would happen if they didn’t?  As Matthew’s story develops, we begin to realize that if the light-bearers insist on darkness, darkness they shall have.  If the peace-people insist on war, war is what they’ll get. If the people called to bring God’s love and forgiveness into the world insist on hating everyone else, hatred and all that it brings will come crashing around their ears.  This won’t be an arbitrary judgment or punishment; it will be what they themselves have been calling for. This is why they must repent while there is still time. The kingdom is coming and instead of helping to usher it in, they are standing in the way.

John’s message of repentance is just as urgent today, if not more so, for those of us who live on this side of Calvary and Easter.  Matthew would want to say to us that the kingdom which Jesus established through his own work, death and resurrection, now poses the same challenges to us.  Are we working to extend God’s kingdom in the world? Have we repented of our old ways—ways of taking offense and holding grudges; of drawing sides and judging which side is right and wrong; of harboring pride and prejudice and excusing it as “not so bad?”  Are we moving with Jesus in the ways of the kingdom or are we standing in the way?

The God who came to his people in Jesus will one day unveil his kingdom in all its glory, bringing justice and joy to the whole world.  On this second Sunday of Advent, how can we get ready for that day? Where do the roads need straightening out in our own lives? What fires need to be lit, to burn away the rubbish we’ve thrown in his path?  Which dead trees need to be cut down? How is God calling us, right here, right now, to repent?