Breakfast On the Beach 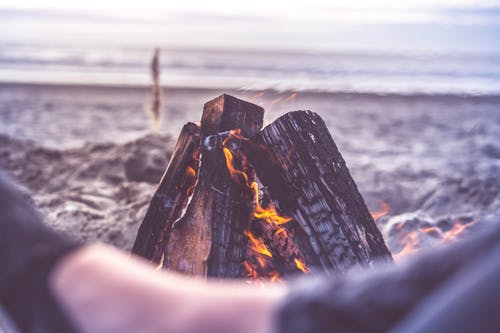 28 May Breakfast On the Beach

Breakfast on the Beach

I want to do a quick check on how observant you as a congregation are.  So, by a quick show of hands, how many of you noticed a difference in sermon titles between what is outside on the board and what is in the bulletin this morning?  Good…not too many of you were paying attention.  As some of you have figured out by now, I usually preach from the lectionary, and one of the texts is from Acts chapter 9,  i.e. the story of Paul’s conversion on the Damascus Road, was where I started on Monday.  But by Wednesday, the Spirit had moved me to the Gospel text from John.   Such is an itinerant preacher’s prerogative.   I didn’t figure you would mind.

By another show of hands, how many of you celebrated an Anniversary of some kind last month?   Anniversaries are one of the ways we mark time and create meaning in our lives.  Some anniversaries pass quietly with no attention, while others merit celebrations on a personal, local or national level.

On Monday of this past week Heidi and I celebrated our 9th wedding anniversary.  I don’t mention to garner attention or congratulation…. or to highlight what some of my friends may think is a miracle, but rather to say at the heart of any wedding anniversary celebration there is a bottom line question.   Any guesses what that question is?  1.  The first question may indeed be , did you remember?  But the Central Question in my humble opinion is.   Do you Still Love me?

As humans, we are wired to show love in many different ways…..in a marriage it takes time to learn the different love languages that we speak.    One of the classical illustrations of these love languages can be found in the lyrics of a song from Fiddler on the Roof, in an exchange between husband Tevia and his wife Golde.  I’ve asked Heidi since she is already up here, to embody Golde for a moment….the lyrics of the song go like this….

(Tevye) “Golde, I have decided to give Perchik permission to become engaged to our daughter, Hodel.”

(Golde)“What??? He’s poor! He has nothing, absolutely nothing!”

(Golde) Do I love you? With our daughters getting married, And this trouble in the town.  You’re upset, you’re worn out.  Go inside, go lie down!  Maybe it’s indigestion.

(Tevye)  “Golde I’m asking you a question…”Do you love me?

(Tevye) Golde, The first time I met you.  Was on our wedding day.  I was scared

(Tevye)  I was nervous

(Tevye) But my father and my mother  said we’d learn to love each other
And now I’m asking, Golde……Do you love me?

(Tevye) Then you love me?

(Golde) I suppose I do

In the lectionary text for today, from the Gospel of John Chapter 21, we hear those same words again.  Except this time, the exchange is not between a husband and wife, but between two very close friends having breakfast on the beach.   The resurrected Jesus, asking his impulsive, impetuous, enthusiastic, thickheaded, bumbling, rash and brash, yet in the end, Champion disciple Peter…. three times……Do you love me?

I found it helpful this week to dig into the backstory and context that shapes this particular scene.  Scholars tell us that the writer of the Gospel of John was most likely the only eye-witness of all the Gospel writers to Jesus’s life and death.  When you compare the Gospels against each other, you find consistently little historical details that leads some scholars to believe only a first-hand witness who was there on the scene could report.

Scholars also say that this chapter, Chapter 21, was added later…much like an Epilogue…and not written by the original Gospel writer John, but rather by someone who knew him.  Yet it was added for a reason, perhaps to complete the story of Peter…who when we left him earlier I the Gospel of John, he was that guy….you know….the one who denied Jesus three times.  Perhaps this Epilogue was added to tell the rest of the story…as a way for Peter’s new role in the early church to be validated…for it was Peter, who Jesus called the Rock, and who was selected to lead the early church, who went on to become the Bishop of Rome, and who, according to historians died crucified upside down on a cross by Nero on or around 7O ad,  with a belt  tied around his waist to hold him.  As it was foreshadowed in verse 18 of our text today.

In our story we find a group of seven men, who have been together for three long years, who have gone fishing…and not for recreation, but for recovery.

What do you do when you need to recover from a life event that has knocked you for a loop?  Where do you go when the world you know has been turned upside down, and the whirlwind of events still has you spinning.   You probably return to that which is familiar, something that you are good at, something that is almost automatic.  For me that means getting my hands in the dirt, weeding mindlessly or moving plants around…. or hopping in my sailboat and letting the wind just take me where it will…I’ll figure out how to get back later.   Maybe some of you actually go fishing.  That is what Peter and six others have done.  They return to the boat—to the baiting of hooks, the casting of nets, to the very thing that put bread on the table before they were summoned to follow a holy man who went and got himself executed.

The story says had a bad night…even though they were pros,  even though the behaviors were on automatic, the fish just weren’t biting….but at least their minds were focused on something else other than the chaos of the last few days….their disappointment, their sense of loss.

Then, at daybreak, just as they were about to pack it in, a stranger appears on the shore—a man who acts like he has fished these waters before, because immediately he starts dispensing advice. Why don’t you throw your nets on the other side of the boat? Why not? And this time the strands of rope mesh grow taut. The men’s muscles bulge. Fish. So many fish. 153 fish to be exact.   Once again, vivid details…that’s John for you.  More than enough to feed eight men.

And then…here is the turning point…the Recognition of who it was…and impulsive Peter jumps ship with joy into the water and swims the 100 yard dash to shore to be reunited with his friend who he though was dead.

There is a charcoal fire, reminiscent some say of the charcoal fire burning the night of Peter’s denial….a breakfast over bread and freshly caught fish….perhaps reminiscent  of that last meal they had together in that upper room,  and a conversation between a Teacher and his quirkiest most impulsive follower, Peter.  And over the shared the intimacy of a meal, they reconnect.   Three times Peter is asked the question, Do you Love me…..three times he gets Peter’s affirmation…..and after each affirmation, there is a commission…..Feed My Lambs…Tend My Sheep…Feed my Sheep…and then the last word….Follow Me.

I like the way that Frederick Buechner sums up this story. “It was for Peter, the Rock, his final promotion, and from that day forward he never let the home office down again. “  Through this breakfast on the beach, Jesus offers Peter what many modern psychologists contend every one of us needs: a sense of belonging and a sense of purpose.

Last Sunday during our Be the Kingdom Sunday, we as a community had the chance to collectively show our response to this central question through the actions of the various service projects we engaged in.  Feed my Lambs…This afternoon we celebrate 30 years of service to the community through the Eagles Wings tutoring program…Tend my sheep.   Belonging….Purpose….

The story of this simple breakfast on the beach reminds us that Easter is not the end point to a beautiful story about how the baby in the manger emerged from the tomb. Easter is the beginning; the dawning of a new day. And our risen Lord meets us at this table to help us understand what we are to do next.   We belong…and we are given a purpose.   So come and eat breakfast; hear Christ asking you that same question he asked Peter, “Do you love me?”.   And may our lives be a witness to our answer. Amen.