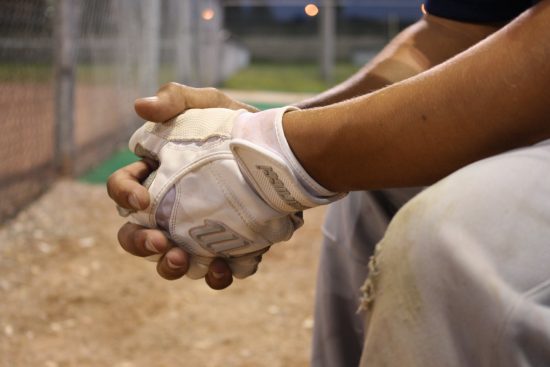 In case you haven’t heard, the Washington Nationals are heading to the World Series!  After an electric, improbable, thrilling run through the postseason, our local Boys of Summer are going where Washington baseball has not been in 86 years.  It sure has been a fun October, and it’s not over yet.

As I have chronicled before, I am a rather recent convert to baseball.  My dad played football and golf, so I grew up with those two sports frequently on the television or as a topic of conversation.  He also followed college basketball which was especially fun in the late 70’s when the Arkansas Razorbacks reached the Final Four and in 1994 when they won the National Championship.  Unless it was an occasional World Series game, he didn’t watch games played on a diamond-shaped field.

It was the human-interest side of baseball that first piqued my interest in the sport, specifically the story of Stephen Strasburg when the Nats drafted him a decade ago.  The more I watched and learned, the more intrigued I became until it is now a regular event to read the box scores and follow the team’s ups and downs on a near daily basis.

One of the things I enjoy most about baseball is that it provides a great metaphor for life itself.  For example, the Nationals have had two mantras in recent months that are sound wisdom (and good theology) no matter what we are facing.  The first, “Stay in the Fight,” is a reminder that nothing significant is accomplished without perseverance.  Adversity is inevitable, both in baseball and in life, so when it comes, don’t quit.  Keep going, keep trying, keep doing the next right thing.  To baseball players that means that no matter the score, they keep playing to the 27th out.  For the rest of us, it might mean we stay committed to a relationship or we keep working toward a goal or we stay on the health regimen the doctor recommended—and we keep at it especially when it is the hardest.

The Nats’ second mantra has been “Go 1-0 today.”  To the 25 men who make up a baseball team, that means they focus on winning one game—today’s.  Forget about yesterday’s game and don’t look ahead to tomorrow’s contest.  In other words, stay in the moment, being present to what is happening right now.  I don’t know about you, but I need regular reminders to do exactly that because as simple as it sounds, it can be very difficult to do.  The truth is that we can’t change the past, so we need to let it go.  Learn from it, yes, but let it go.  And, if we look too far ahead, we’ll miss the opportunity that is right in front of us.  Today is all we have, since none of us is guaranteed a tomorrow.  Our lives are the richest and happiest when we are fully invested and engaged in now.  Jesus called it living the abundant life.

Starting Tuesday, I’ll be watching every pitch for as long as the World Series lasts.  Friends, family, and parishioners have been talking about how sleep-deprived we’ve been over the past two weeks as the Nationals won the Wild Card game, then the Division Series, then the National League Pennant.  Folks, we’ll sleep in November.  Go Nats!!