From the Pastor’s Desk (Yay Bears!) 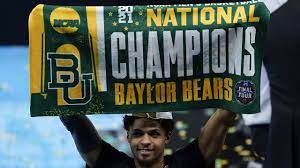 Do I need to tell you that I am on Cloud Nine today?  Monday night my alma mater prevailed to win the NCAA Men’s Basketball Championship.  With apologies to Gonzaga fans, Baylor’s stifling defense and electric offense were fun to watch.  And just a day later, the Washington Nationals season finally started after being delayed due to Covid.  I am keeping my Nats mask handy (thank you, Lillian!) and I am ready.  Play ball!

For those who have read my blog over the years, you know that I often find life lessons within the sporting world.  That is certainly true of Baylor, as the Bears’ current triumph arises from a program that was rocked by more than a black eye or a scandal, but by a truly horrific lapse of moral judgment—all at a school with deep religious roots.  Back in 2003, Baylor basketball player Carlton Dotson was arrested and charged with murdering teammate Patrick Dennehy.  (His trial resulted in conviction and a 35-year prison sentence.)   Former Baylor head coach Dave Bliss was then caught on tape telling players to paint Dennehy as a drug dealer to hide illicit payments and other NCAA violations within the basketball program.

When he arrived in 2003, Baylor’s current coach, Scott Drew, was in his early 30s and tasked with a rebuilding job “unlike any in college basketball history,” according to ESPN.  Before Drew’s third season, in 2005, the NCAA dropped the hammer with penalties and sanctions.  So many players abandoned the program that Drew didn’t have enough men to put together a team.  To fill his roster that year, the coach held open tryouts.  The team finished 4-13.

“Well, obviously, going into every game being 30- or 40-point underdogs and half your team walk-ons, and you know as a coach, [you’re just trying] to keep it close, keep it within 20 by the first half,” Drew said.

Baylor basketball was, understandably and deservedly, in the toilet.  No, not in the toilet.  In the sewer.  Which is still nothing compared to the tragic loss of a young person’s life and the suffering that has and will continue to alter his family forever.  No amount of winning can ever make up for that.

Yet as the confetti rained down Monday night, what struck me were chords of redemption.  It is Easter, after all, so redemption seems an apt theme.   I was particularly impressed with Scott Drew.  How many young coaches would persevere for 18 years through such deep valleys?  How many would stick around when those lopsided, losing seasons were directly impacting their own coaching win/loss statistics?  How many would put their personal reputations on the line to take on such a challenge?  How many would choose to endure the inevitable rebuilding setbacks—the top recruits who said “no” to a tainted program, the debilitating lack of hope, the desperate need to restore trust.

It is surviving, and then finding ways to thrive, in the face of relentless adversity that both exposes and forms our character.  We can persevere or wilt.  We can give in to fear or allow our faith to be purified through the testing.  We can learn new skills or we can cling to coping mechanisms that no longer serve us well.  We can change and adapt or harden into our preconceived ideas of “how things are supposed to be.”  The latter will make us brittle and angry, rather than open us to the new possibilities and renewed life that redemption offers us.

Upon winning the ultimate college basketball crown Monday night, Drew Scott first and foremost thanked God for the opportunity to coach the Baylor team.  And he thanked those who had come before, those on whose shoulders he and the Baylor team inevitably stand.   Reflecting on the hard years and the team that went 4-13, he said, “Credit those guys who won [four] games that year.  They laid the foundation.  Those guys have stayed with the program and helped support these guys.  And that’s what you love.  Over 18 years, there’s so many people that put in hard work and sweat.”

Even from the sewer, we can learn, grow, and experience redemption, because He Is Risen!  (And congratulations, Bears!)