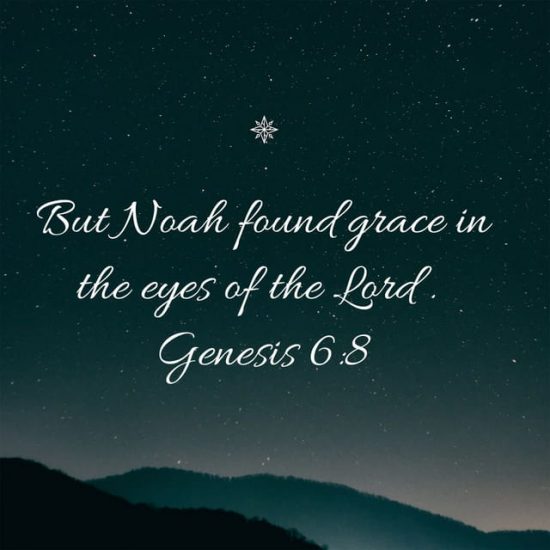 Friends,  click here for today’s pre-recorded worship service. You will find the worship guides for today’s service linked below:

The flood.  It is one of the most familiar stories in the Bible, a story we often learn as children as being about a man named Noah, a big boat, pairs of animals and whole lot of water. That certainly does provide the setting for the story, but the flood narrative is about much more than water.  It is primarily a story about the character of God and how much God loves us.

The flood narrative faces a basic incongruity of human life.  On the one hand, God called the world into being to be God’s faithful covenant partner.  In so doing, God filled creation with unity, harmony, goodness, beauty, and abundance.  But on the other hand, things didn’t go according to God’s design.  It turned out the creation was resistant to the purposes of the very one by whom and for whom it exists.  Given the freedom to choose, humans wanted to go their own way, doing what was right in their own eyes.  That essential fracture between Creator and creation is the premise and agenda of the flood narrative.

Before we launch into the story itself, the imminent Old Testament scholar Walter Brueggemann points out that it is important to be clear about the nature of the biblical text that is before us.  As with the creation story of Genesis 1, the flood narrative is not an accounting of history, per se.  That is not to say that historical reminiscences of actual flood experiences aren’t present; simply that a push to find data that “proves” the flood event would distract us from what the scripture is actually saying.

Brueggemann is equally adamant that this story cannot be dismissed as merely “myth.”  In contrast to myth, Genesis 6 is not a universal statement about the world but rather, a particular Hebrew statement about the God of Israel and his peculiar way of transforming the world.  What meets us here, in Brueggemann’s words, is not history or myth but proclamation, an announcement of what God has done about his fractured world.

Chapter by chapter we’ve watched God’s creation begin to spiral downward.  Adam and Eve, given a home of beauty and plenty and enjoying an intimate relationship with God and one another, out of mistrust and arrogance, broke the one boundary God placed around them.  Before long, Adam and Eve’s children broke the rules, too, with Cain murdering his brother.  Additional generations continued to spiral out of control, falling further into the evils of sin.

Cain’s great-great-grandson, Lamech, with complete contempt for creation and human life, intimidated his wives by boasting about killing men in acts of vengeance.  He went so far as to compare himself to Cain, saying that he was the greater sinner.  What a thing to brag about.

Not surprisingly, God concludes that the world has betrayed his divine intent.  The noble aims of God have been treated shabbily.  The vocabulary describing this perversion includes words like wickedness, evil, corrupt, filled with violence.  The crux of the matter is that creation has refused to be God’s creation, refused to honor God as God.  As the Apostle Paul will later put it, in various ways, “creation has exchanged the truth about God for a lie, worshiping and serving the creature rather than the Creator” (Rom. 1:25).

God treats this situation with utmost seriousness.   God’s creation has been permeated with the goodness and purposes of God, and God holds an expectation for how the world should function that God will not abandon.  Yet the “very good” of Genesis 1 has now become, “I will blot out.”

If all we were told was about the impending actions of God, the story would be flat and one-dimensional.  But, in a bold and unexpected move, the narrator invites us, the listeners, to penetrate the very heart of God.  What we find there is not an angry tyrant, intent on annihilating what he has made, but a troubled parent who grieves over the alienation that exists with his children.  God is acutely aware that “every inclination of the thoughts of [men and women’s] hearts” are unrelentingly hostile.  The conjuring and scheming, the daydreams and self-interest of the world are all tilted against God and God’s intentions.  Something is so deeply amiss in creation that God’s own dream has no prospect of fulfillment.  With a perverted imagination, God’s world has begun to conjure its own future quite apart from the future willed and designed for it by God.

All of this leaves God not angry but grieved; not enraged but sad.  In verse 6 we see the deep pathos of God.  God is now experiencing the same pain that was bequeathed to the woman as a result of her sin in chapter 3.  The evil heart of humankind deeply troubles the heart of God.  Both parties are touched by humanity’s sin, as they always are.

Two questions arise out of God’s pathos.  First, is it possible that God would really bring an end to his world?  To that question we need look no further than our own lives where we know first-hand the disintegration of our world that results from sin.  Our infidelities—to God, to one another, and to ourselves—diminish our lives and all of life around us.  Lives do shatter and end.

The second question that arises is can God change God’s mind?  Many people hold the view that God is unchanging and indifferent to anything going on in the world, as though God were a plastic, fixed entity.  But the God Israel understood is a Being who hurts and celebrates, responds and acts in remarkable sovereign freedom.  God’s character is consistent, but God’s actions are not captive to old resolves.  God is as fresh and new in relation to creation as he calls us to be with him.  God can change, so that he can abandon what he has made and can rescue what he has condemned.

This kind of insight invites us to view this narrative from a different perspective.  We are confronted not primarily with a crisis of too much water but with a crisis in the heart of God.  The crisis is not that the flood places the world in jeopardy.  The water becomes the dramatic setting in which God’s grief over his rebellious world is worked out.  Instead, it is a crisis that emerges because God is profoundly impacted by the suffering, hurt and circumstances of his creation.  God enters into the world’s “common lot.”  Here in chapter 6, Jesus’ entry into our common lot is foreshadowed.

From the very beginning, God’s creative power was never coercive and authoritarian but invitational and permission-giving.  God wills creation to be turned toward him but doesn’t insist on it by fiat.  Rather, bringing the world to trust and obedience is accomplished by God’s own suffering.  Already we see the hurt God endures because of and for the sake of his wayward creation.   It is yet another foreshadowing:  the new creation of Revelation will be wrought with the same costly engagement and waiting as was the first creation of Genesis.

It is only after the real focus of the story has been established that we finally meet Noah.  The narrative has held off as long as possible bringing Noah into the drama, and when he appears, we know nothing about him.  But God and the narrator know enough.  Noah is righteous and blameless.  He walks with God.  In this dismal story of pain, there is someone who embodies a new possibility.

Noah’s presence goes against the flow of the story.  Against the announcement of flood, destruction and death, Noah finds favor.  The narrator wants the listener to turn to Noah, to consider that in this troubled exchange between Creator and creation there is the prospect of a fresh alternative.  Something new is at work in creation.  In contrast to Adam and Eve, Noah is the fully trusting and responsive human who accepts his own place in creation and lets God be God.  He receives God’s commands as promises of life, fulfilling all that God tells him to do.  It is ironic that at the moment of pathos and impending death, embodied faith first appears, and with it, we hear the proclamation that this story is making:  faithfulness is possible even in this world.

When we turn to the end of the story, we discover that the grief of God and the emergence of Noah as the representative of new humanity override the forces of evil, destruction and death.  The flood ends.  Life begins again.  The resolve to destroy is mitigated.  The issue at the narrative’s beginning is resolved, but not in terms of the destruction we’ve come to expect.  Resolution comes not as a result of God’s anger or because God chooses to indulge the hostile creation or because creation changes.  Instead, resolution comes because God resolves in his heart to fashion something new.

God does so after reaching two conclusions:  first, that humankind is hopeless.  Creation has not changed, nor will it.  It is deeply set against God’s purposes.  The imagination of the heart first recognized as evil in 6:5 is still imagination of the heart which is evil.  Even the terror of the waters has not changed that.  Hope for the future is not predicated on possibility thinking or human actualization.  Hope will depend on a move from God.

The second conclusion of God is a fresh decision cast in the language of a royal decree.  God resolves that he will stay with, endure, and sustain his world, notwithstanding the sorry state of humankind.  God will not let the rebellion of men and women sway him from his grand dream for creation.  God will continue to pursue his decision for a harmonious, obedient creation.  To be sure, the Lord has been committed to the creation project from the very beginning, but that commitment is intensified, for now it is marked by grief and the hurt of betrayal.  It is now clear that such a commitment on God’s part is costly.  The Creator/creation relationship is not simply that of a mighty God and a needy world; it is a tortured relationship between a grieved God and a resistant world.  And of the two, the real changes that occur as a result of the flood happen in God.

In contrast to every notion that God stands outside the plight of humankind as a domineering father or angry judge, this picture of God proclaims pure gospel: the love and mercy of our Creator.  It foreshadows how God will act when Israel will, through sin and rebellion, go its own way and end up in exile.  God will not abandon Israel any more than creation is abandoned to the chaos of its disobedience.  And, of course, it foreshadows Jesus’ grief and his commitment to embrace humanity in a new way and offer us new life.  In the flood story, the sign and symbol of God’s grace poured out to us is the rainbow.  Later, it will, of course, be the cross.  Both are God’s way of saying, “never again” not because we are different or better but because God has made a decision about the grief and trouble of his own heart.

Aren’t we grateful the story of the flood is about more than water?