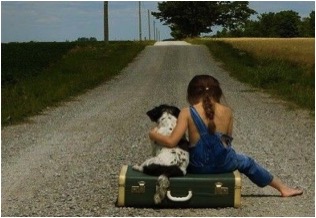 Did you ever run away as a kid? How far did you get before a parent or neighbor or sibling discovered your hiding place, or your cache of peanut butter sandwiches and cookies ran out and hunger drove you back to your mother’s well-stocked pantry?   I never actually ran away as a child, but I sure know the impulse. I’ve wanted to plan and execute a “great escape” in adulthood far more often than I ever considered it growing up.

I haven’t—and won’t—actually do it, of course. The idea of turning out the lights, locking the door, walking away and never looking back is a fantasy, not a plan. I am most susceptible to such musings when I am tired, sad or hurt, feeling overly burdened, or angry—and if you throw in hunger or sleep deprivation, it’s a baaad combination.

Moses experienced a couple of great escapes. The big one, the one we still talk about 3300 years after the fact, is the great escape he led on behalf of the Hebrews. We know it as the Exodus, the long trek from slavery to freedom and the Promised Land that God initiated. But 40 years before the Exodus occurred, Moses made a different kind of escape. That time he did run away, packing his bags hastily and getting out of Egypt and away from Pharaoh as fast as he could. He had killed a man—an Egyptian foreman who was abusing a Hebrew slave. Pharaoh found out and suddenly, Moses was a marked man, a fugitive from the law. It’s not exactly the kind of action we expect from someone who will become one of the greatest prophets and leaders in Jewish history. (Our Calvary Kids did a great job drawing Moses running away from home.   I’m delighted to include a couple of examples of their artwork in this week’s blog!)

As the children’s drawings illustrate, Moses’ quick escape landed him beside a well in the Midianite desert. After a chance encounter with seven sisters, he ends up with a new family, a new home, and a new job. It’s certainly not a glamorous job—tending sheep was a steep fall from the lofty heights of life as a prince of Egypt—but it did offer Moses an opportunity to “regroup.” Over the next forty years, he’ll have all the time in the world for self-reflection.

Occasionally I’ve done something I regret, and the fantasy of running away was appealing in order to avoid dealing with the consequences of my mistake.   But more often, the dream of escape comes because life is hard. I’m coping with a hard situation. I’m dealing with a hard boss or difficult relative or gnarly neighbor. I’m weary from facing a stressful circumstance that never seems to change or a chronic illness that won’t improve. I’m worn down from constant demands. In those moments, it’s tempting to want to run away.

That’s when I’m grateful for the stories of scripture, stories like Moses. It’s encouraging to know that making mistakes, dreaming of escape, and even colossal failure don’t eliminate me from God’s plans. It’s comforting to see how human God’s “heroes” are. Scripture reminds me that God is so much bigger than my fears and foibles. God’s redemption is ongoing, redemption of the whole earth and of all humanity. But, that includes me. Sometimes God’s redemption looks like a well and a shade tree—just a moment of respite in an otherwise barren landscape. The thing is, those moments of solace are all around me, if I will only open my eyes and be attentive. God’s constant invitation is to rest in Him. Yes, the demands of life are still there and yes, they may still be hard. But, God is present. God is at work. There is more going on than I can see. Abide. Trust. Grace. These are the words I hear God speaking to me today. A peanut butter sandwich doesn’t sound bad, either.