Walking Wet:  Hope in the River of Life 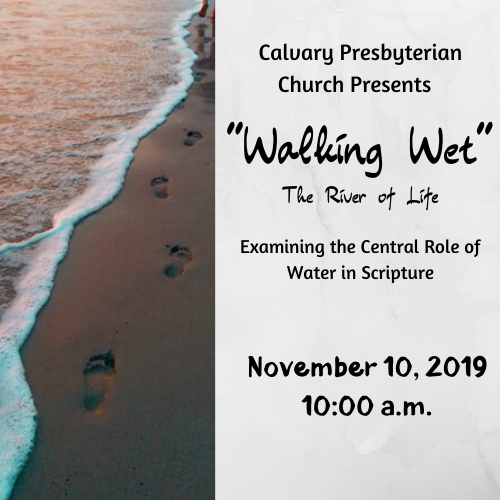 10 Nov Walking Wet:  Hope in the River of Life

Walking Wet:  Hope in the River of Life

During this series we have moved from the chaotic waters of creation to the waters of baptism, from times of thirst and drought to times of deliverance from too much water, from streams of forgiveness to Living Water.  Today we conclude our Walking Wet series at the River of Life, a powerful, hope-filled image of the end of time when there will be plenty of water for all eternity.

We sometimes question what end-time images and messages have to do with our lives which are so deeply rooted in the reality of the here and now.  And the answer can be found in one word:  hope.  The message of John to his churches is a message of hope, and I believe the 21st century church is in as desperate a need for hope as were our 1st century brothers and sisters.

First, a little context.  John wrote Revelation at the end of the first century, when Christians were under heavy persecution and Jerusalem lay in ruins.  With the destruction of the temple and David’s Royal City in A.D. 70, the people wondered how God could have allowed such a turn of events to take place.  The temple was God’s throne, God’s home.  What did it mean that God no longer had a place among his people?

John has a vision, and his vision embodies a truth of critical importance:  the way things are now is not the final word, so there is no reason to lose hope.  God is very much on the throne, and God’s purposes will not be thwarted.

John is limited, as are we, to human language and human images to describe what God’s kingdom and life in God’s realm are like.  So, he tells of a bejeweled New Jerusalem of gold and splendor.  He describes the Holy City as a place of peace and harmony.  John says in 21:1 that the sea is no more.  The waters of chaos that were present at creation, that terrified people in both the Old and New Testament scriptures, are no more.  John’s vision introduces the totality of God’s presence in every part of the new earth.  Chaotic and dangerous waters have no place anymore.

In 21:3 we read of God’s dwelling with mortals and that all humanity will be God’s peoples.  Scholars call our attention to the fact that the word used here is plural–peoples, not people–which indicates that all people, not just a few chosen ones, are included in the New Jerusalem.  All are invited to live in community with God and each other in the Holy City, which is another sign of God’s eternal hope and joy.

The compassion of God is on display in 21:4 through the stirring words, “God will wipe every tear from their eyes.  Death shall be no more; mourning and crying and pain will be no more…to the thirsty I will give water as a gift from the spring of the water of life.”  It is a picture of God taking care of human needs for all eternity.  In the new heaven and new earth, the love of God trumps everything and hope “springs eternal.”

In his book Revelation, theologian Eugene Boring points out that, as we talked about a couple of weeks ago, God is not a throw-away God.  John tells us not that God will make “all new things” but will make “all things new.”  God does not discard creation for something else.  Instead, God perfects the new earth so that there is no pain or death or sin.  This is the restoration of the way God intended and intends creation to be.

We are told that there are twelve gates to the New Jerusalem that will always be open.  It is fascinating to note that there seems to be evil-doers who remain outside the walls of the city, who choose to make their place “in the lake that burns with fire and sulfur, which is the second death” (21:8).  There is no evil in the Holy City itself, and with gates that are always open, there is an implicit invitation to sinners to give up their wicked ways and enter the everlasting city through the open gates.  Will there come a day with they accept the invitation and enter the city?  We are not told, and we do not know.  Theologians through the centuries have debated, prayed and hoped that they will repent so they can be welcomed into the loving arms of God.  What we do know is that the door is always open to them which provides another sign of a God full of grace and hope for all peoples.  It also serves as a reminder of the folly of writing off anybody.

John goes on to describe the utter splendor of the eternal city.  There is no temple, no holy of holies as God’s people have known for millennia.  Instead, God is everywhere and in the midst of everything.  People will no longer gather at a specific time and place to worship which is exactly what Jesus told the Samaritan woman at the well.  Rather, they will worship God all the time and in every place.  God’s final dwelling place is in and with God’s people.  This is upside down from what many of us have been taught.  Humanity does not dwell in heaven with God, but God chooses to dwell with humanity, in community, in the New Jerusalem.  This will literally be “heaven on earth.”  In the beginning, there was God, and here at the end, there is God, a God who loves all of creation—still.  God’s last word is for the restoration and perfection of creation, including humanity.

Finally, we are told that humans will see the face of God, meaning we will have a full encounter with God.  Moses saw God’s back, but God’s face is more than humans can take in.  Yet in the new heaven and earth, we will see the face of God in all God’s glory.   For first-century Christians suffering oppression under the Roman Empire, this was a deeply moving and comforting vision, enabling them to endure with hope and faith the difficulties they faced.

The point of John’s vision is not for us to get caught up in end-time speculation or to be worried about what is coming or how or when.  What is important is that through Christ, we know the end of the story for both our own lives and for creation.  We are part of a story in which there is everlasting triumph of love over evil and over everything that separates us from God.  Our hope is not that things will somehow get better on their own.  Our hope is in God, and because God is love, all the things that cause God sadness are forever taken away.  Hatred, violence, hunger, and loneliness are gone.  There are no more wars.  No more distrust between people.  No more disease, either mental or physical.  No more abuse or brokenness.  John is not painting us an exact picture of what eternity with God will look like.  He’s inviting us to envision the best ending we can imagine, and then to know that it will be far, far better than anything we can dare dream.

But, of course, we’re not there yet.  The Church now lives in what we often call the “in-between” time.  We know the resurrected, living Christ, but we also know that he has not yet come into his full and final glory.  So, what do we do between now and then?

We live in hope.  While that will look differently for each of us in our own unique lives and circumstances, let me offer some broad-brush strokes of what it means for us to live into hope.  First, as we saw last week with the Samaritan woman at the well, we continue to reach out to a broken and fearful world to offer hospitality, kindness, and genuine acceptance wherever, whenever, and as often as we can, to everyone we can.

Second, we look for ways and places to make the world a better place.  In ways big and small, we can all make a difference.  Since we’ve been talking about water all these weeks, look for one thing you do can help provide clean water to people who don’t have it:  switch to reusable water bottles or recycle your plastic ones or turn off the faucet while you’re brushing your teeth.  Beyond water issues, you can pick up the litter you see or give what you’re able to the kids when as they collect money for Pigs & Chicks.  All of us can do something to make the world a cleaner, safer, kinder place for all of us to inhabit.

Third, open your heart to new people and new ways of doing and being in community together.  It is an understatement to say that the world has changed drastically and dramatically in the last 50 years, and that has had and continues to have an impact on what it means to be the church of Jesus Christ in the midst of all this change.  It is an ongoing discernment process and while we do that listening work, we are called to continue to trust in God and trust that we know the good news—we know the end of the story.

One of the confessions found in the PC(USA) Book of Confessions is the Confession of 1967.  Arising out of the turbulent decade of the 1960’s, churches everywhere were challenged to restate their faith to address the church’s role in modern life.  It was our denomination’s first new confession of faith in three hundred years.  It says this about our belief and hope about the end times:

“Biblical visions and images of the rule of Christ, such as a heavenly city, a father’s house, a new heaven and earth, a marriage feast, and an unending day culminate in the image of the kingdom.  The kingdom represents the triumph of God over all that resists [God’s] will and disrupts [God’s] creation.  Already God’s reign is present as a ferment in the world, stirring hope in men [and women] and preparing the world to receive its ultimate judgment and redemption.  With an urgency born of this hope, the church applies itself to present tasks and strives for a better world.  It does not identify limited progress with the kingdom of God on earth, nor does it despair in the face of disappointment and defeat.  In steadfast hope, the church looks beyond all partial achievement to the final triumph of God” (Sections 9:54 and 9:55).

No, friends, that final triumph is not complete.  But it has begun and our life together in community is an embodiment of that.  So, let us live in hope!  God’s kingdom is here.