A Cross-Shaped Life: Unity At the Table 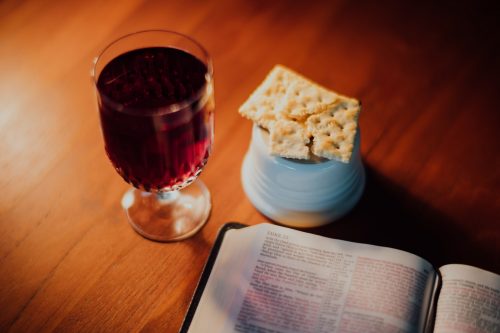 07 Feb A Cross-Shaped Life: Unity At the Table

A Cross-Shaped Life:  Unity at the Table

Sunday’s Service was pre-recorded due to the threat of snow,  and can be accessed here.

Unity is one of the buzzwords of the moment.  From right to left, North to South, politicians to church leaders, people are calling for unity.  And I’m not knocking it.  Like a lot of people, I’m weary of all the attention being focused on what divides us:  liberal or conservative, rich or poor, traditional vs. contemporary. Black, white, brown.  Native-born or immigrant, gay or straight.  And everything I’ve just named?  Those are just the divisions in the church, let alone the rest of the world.

Not that any of this is new.  Churches have been splitting since before the Great Schism of 1054, which led to the Roman Catholic Church and the Eastern Orthodox Church breaking communion with one another.  Long before that there were the Judaizers, Modalists, Arius and Alexander, Docetism, Gnostics, Montanism, Apollinarians, Marcion, Manichaeism, Nestorius, Augustine and Pelagius—want me to keep going?

Five centuries after the Schism of 1054, the Protestant Reformation led to further splintering.  And today, the fracturing of the church continues. Some people joke that Christians have a strange approach to math: they multiply by division!

And to all of this, the apostle Paul would say, “We are not amused!”  Which is exactly what he said, in so many words, to the church at Corinth.

In his first letter to the Corinthians, Paul challenges Christians in the church to live a cross-shaped life, which in Paul’s mind includes efforts to maintain the unity of the church.  “Now I appeal to you, brothers and sisters, by the name of our Lord Jesus Christ, that all of you be in agreement and that there be no divisions among you, but that you be united in the same mind and the same purpose” (v 10).

Be in agreement, he says.  No divisions.  United in the same mind and purpose.  Easier said than done, don’t you think?

Paul is not naïve about the challenge of maintaining unity.  For starters, he knows that there is gossip in the church, which was as destructive a force in the first century as it is today.  “For it has been reported to me by Chloe’s people that there are quarrels among you, my brothers and sisters,” writes Paul. “What I mean is that each of you says, ‘I belong to Paul,’ or ‘I belong to Apollos,’ or ‘I belong to Cephas,’ or ‘I belong to Christ’” (vv. 11-12).

Although the names have changed, Christians still proclaim loyalties to particular church leaders.  “I’m a big fan of Rick Warren,” or “I follow Pope Francis,” or “My favorite is William Barber.”  Who we follow, listen to, heed what they say usually tells a lot about whether someone leans toward being Evangelical or Catholic or Progressive in their practice of the Christian faith.

Is that such a terrible thing?  Not necessarily. The church universal needs inspirational leaders and teachers of integrity whose differing points of view lead us to think and wrestle with important issues.  But at the end of the day, each of us should proclaim only that “I belong to Christ.”  Our call is to live a cross-shaped life, not an Evangelical- or Catholic- or Progressive-shaped life.

Paul actually pokes a little fun at anyone who puts a church leader in the place of Jesus.  “Has Christ been divided?  Was Paul crucified for you?  Or were you baptized in the name of Paul?” (v. 13).  Of course not!  Christ was crucified for each of us, we were all baptized in the name of Christ, and Christ cannot be divided.  Therefore, concludes Paul, the church should not be divided.

But how does that work?  How do we achieve unity within the Christian community?  No one can wave a magic wand and make the divisions between people disappear.  But we can start by sharing a meal.

In a book called We Will Feast: Rethinking Dinner, Worship, and the Community of God, author Kendall Vanderslice suggests that divisions in Christian churches can be healed around a table.  To write the book, she spent a year travelling around the country visiting what she called “dinner churches,” churches that have a shared meal at the center of their life together.

Vanderslice worked as a baker and labored in the restaurant industry, and she also studied food at Boston University and theology at Duke University.  She brought that background and expertise to visits she made to churches, from Garden Church in San Pedro, California to Saint Lydia’s in Brooklyn.  At Potluck Church in Kentucky, she found that, like the name implies, everybody contributes something to the table.  In Seattle, Community Dinners combine feasting with friends with feeding the hungry.  When Church in a Pub offers worship in Lansing, Michigan, restaurant servers walk around taking orders while the pastor offers Communion.

What Vanderslice discovered in all these congregations is that relationships deepen as people eat, pray, and talk together.  That combination satisfies two basic human needs: to be nourished by food and to find companionship with one another.  And the result is that these churches experienced new forms of unity.

At the heart of our worship is a table

The unifying power of a meal really shouldn’t surprise us.  After all, as we saw last week, Jesus himself acted as host, established his church around a table, and asked his followers to eat together in remembrance of him in a meal we call the Last Supper.  Later in 1st Corinthians, Paul warns about divisions at the Lord’s table, and says to members of the church, “Because there is one bread, we who are many are one body, for we all partake of the one bread” (10:17) Another way to say it is that the church, as the body of Christ should always be united by the act of breaking bread together.

Vanderslice found this to be true. The congregations she visited were diverse. “Each had slightly different ideas about how to read Scripture, what they believed Communion to be or how they understood God’s engagement with the world.”   But she found that “the same Holy Spirit is present and active in every single dinner-church community,” and from that she concluded that “God is at work bringing us back to the table.”

Around the table, Christians bond in spite of their differences.  At the table, says Vanderslice, “we grasp and share the most basic need of all humanity: the need to eat and drink.  We bond when we sit down at the table, claiming first and foremost that we eat and drink together in remembrance of Christ’s death and resurrection.” At the table, we live a cross-shaped life.

The power of the cross

Paul is focused like a laser on the power of the cross.  “For Christ did not send me to baptize but to proclaim the gospel,” he writes, “and not with eloquent wisdom, so that the cross of Christ might not be emptied of its power.  For the message of the cross is foolishness to those who are perishing, but to us who are being saved it is the power of God” (vv. 17-18).

When we sit down to eat and drink together, we remember Christ’s death and resurrection—the message of the cross, “the power of God.”  We eat one bread as one united body.  We believe that the risen Christ is present with us, drawing us together as the community that is the body of Christ in the world today.

The good news is that a shared meal can unite people and build relationships across all kinds of divides.  At the table, seniors sit with teenagers, blacks with whites, gays with straights, Republicans with Democrats, homeowners with the homeless.  Educational barriers, language barriers, socio-economic differences—these can give way to peace and unity, what the Bible calls “reconciliation,” and it can happen at the table.  “All this is from God,” says Paul in his second letter to the Corinthians, “who reconciled us to himself through Christ, and has given us the ministry of reconciliation” (5:18).

Rick Warren of Saddleback Church in California is convinced that relationships are the glue that holds a church together.  Such relationships often begin when a congregation eats together.  He recalls that when Saddleback was much smaller, it used to rent a country club every three months and have a new members’ banquet. All the new members would be recognized and would give a two-minute testimony, offering stories of how their lives had changed. As an act of hospitality, older members would pay for the meals of the newcomers.

I can’t help but wonder if much of the animosity in the church and in our national dialog hasn’t been exacerbated by our inability and our increasing unwillingness to sit together around the table.  Being in agreement is tough today.  Evangelical and progressive churches are not going to agree on every theological or biblical issue, any more than liberals and conservatives are going to agree on how to approach political challenges.  Whether the issue is race or sexuality or gender, poverty or medical care or immigration, divisions inevitably appear over how to define what is moral and what is “just” and what to do about it.  It is difficult to be, as Paul exhorts us, united in the same mind and same purpose.

So, friends, let’s eat together whenever we can, starting this morning around the table of Christ.  Let us practice the unity that we are called to, not because we all agree about everything but because we are all loved by Christ and commanded to love one another.  Starting here.  Starting now.  Starting at the table.