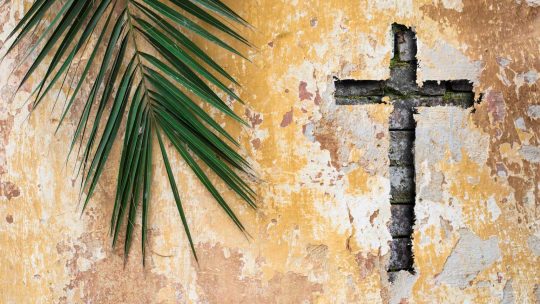 A couple of weeks ago we talked about what makes for a bad year, in Biblical language, a year that the locusts have eaten.  And although 2020 certainly feels like a contender for “worst year ever” for those of us who have endured it, we discovered that there are far worse years on record from a global, historical perspective.  But that doesn’t in any way diminish the anxiety and isolation, the loss and grief, the pain and suffering that have been our regular companions throughout the pandemic.  I’ll be honest—I had a much harder time than normal making Lent meaningful because in very real ways, I have felt like I’ve been in one long, uninterrupted thirteen-month season of Lent.  Which is why today’s celebration of resurrection is perhaps the most meaningful Easter I’ve ever had.  The joy of new life is, for me, visceral and palpable—a joy that is equal parts relief, gratitude, and hope.

For the past several weeks, as I’ve thought about this moment of being together, reunited in the sanctuary for worship, and as I’ve thought about the story of Jesus’ resurrection, the same story we tell every year on Easter Sunday, a question has repeatedly inserted itself into my thoughts and prayers and sleep.  Before I tell you what the question is, let’s set the stage…

Mark’s gospel tells us that when the Sabbath was over, “Mary Magdalene, and Mary the mother of James, and Salome bought spices, so that they might go and anoint [Jesus].  And very early on the first day of the week, when the sun had risen, they went to the tomb” (16:1-2).

These words are so familiar, that it’s easy to read over them and past them without really entering the story.  But think about it—what do you suppose these women were feeling?  Their Messiah and friend had been killed in a humiliating death on a cross.  His body had been laid in a cave-like tomb, and a large stone had been rolled against the door.  I can imagine that they were feeling grief over the death of Jesus, stress about the future, and anxiety about how they would move the stone to do the work they had come to do.

As they were walking along, they had wondered out loud “Who’s going to roll away the stone for us from the entrance to the tomb?” (v. 3).  Anxiety is a feeling of fear or apprehension about what is to come, and that is exactly what the women were experiencing.  In contemporary language, we would recognize that their anxiety was having a negative impact on their mental and emotional health.  They’d had a lot of bad news to absorb in a short period of time.  Their emotions had been whipsawed over the past seven days, from Jesus being hailed as a king as he entered Jerusalem to the chaotic scene in the Garden of Gethsemane to the abuse Jesus suffered at the hands of the Roman guards to his death.  Imagine the women’s shock when they arrived at the tomb and saw that “the stone, which was very large, had already been rolled back” (v. 4).  Did they see the open entry to the tomb and exhale with relief, that their immediate problem was solved?  Or, were they even more anxious, this time about what might have happened to Jesus’ body?

Not knowing what they would find, “they entered the tomb and saw a young man, dressed in a white robe, sitting on the right side; and they were alarmed” (v. 5), Mark tells us.  They didn’t expect to see anyone so early in the morning, so the man’s presence caused concern.  Seeing their startled expressions, he said to them, “Do not be alarmed; you are looking for Jesus of Nazareth, who was crucified.  He has been raised; he is not here” (v. 6).  For days, they had been focused on the tragic events that had unfolded, but here in the tomb, the young man’s words gave them a first glimmer of hope.

Continuing, the man instructed the women to “tell [the] disciples and Peter that [Jesus] is going ahead of you to Galilee; there you will see him, just as he told you” (v. 7).  His words changed their focus from the bad news of the past few days to a new possibility for the future.  He promised them that Jesus was going ahead of them, and that they would see him in Galilee.

What do you think you would have thought and felt in that moment?  Relief?  Confusion?  Joy?  Would you have been afraid it was “too good to be true?”  Mary, Mary Magdalene, and Salome fled, filled with terror and amazement.  This was not news that resulted in a leisurely stroll home, a quiet pondering of an angelic insight.  These women picked up their skirts and ran, and despite the man’s instructions, Mark admits that “the [women] said nothing to anyone, for they were afraid” (v. 8).  When we think about that, it doesn’t really surprise us, does it?  We know from our own experience that negative emotions are hard to overcome.  The fear that had been gripping them was not easily or instantly thrown off.  It took time.  And what was true for them is also true for us.

It is all too easy to get sucked into what experts call a “vicious cycle of negativity.”  That’s what happened to the women and it’s what happens to us when we focus on the large stones that block our way.  We all have them.  We are all entombed in some way or another, and there are stones of various kinds that impede our progress, get in our way, and block our path.  The question that has grabbed hold of me in recent weeks is this:  what needs resurrection in us and who will roll away the stone that is in our way so that we can experience new life?  The good news of Easter is that God has acted in our lives to break the cycle of negativity.  We are invited today to live into that good news in three ways: to see that the stone has already been rolled back, to believe that Jesus has been raised, and to focus on the future where the risen Lord is ahead of us and waiting for us.

For starters, the stone is gone, the barrier has been broken down.  Most of us have fears about the future, and we often focus on worst-case scenarios.  This was what the women were doing as they approached the tomb, fixating on the enormous stone that they feared was going to prevent them from entering the tomb and anointing the body of Jesus.

But guess what?  Fear is almost always worse than reality.  “Our brains are crazy,” writes Tyler Tervooren in HuffPost.  “Every day they lie to us about how terrible things are or how bad they’re going to be, but when we finally ignore the fear [we] realize everything’s pretty much okay, the world will keep turning, and we’re going to survive.”

Yes, the world will keep turning, and God will keep working.  The women were so afraid of the stone that they never dreamed that God would take action to roll it away.  Their brains were lying to them about how terrible things were and how bad things were going to be.  They let their fear undermine their faith.

The parallel for us is clear:  don’t let your brain convince you that the stone you fear will always stand in your way.  Maybe you are anxious about something at school or work or home.  Perhaps you are fearful of failure or loneliness or a health issue.  Often, it’s something in the unknowable future that we fear—will we have enough money in retirement, who will care for us if we need it, will we make the best decision about that job or relationship?  Don’t let your brain lie to you.  Since God is always at work and always present with you no matter what you face, fear is worse than reality.

Next, open your eyes and see that Jesus is no longer dead.  The young man in the tomb sensed that the women were not going to believe what he was saying, so he invited them to see for themselves.  Jesus “is not here,” said the man.  “Look, there is the place they laid him” (v. 6).

Jesus is not here, dead in the tomb.  See for yourself.  We find him alive in people who are showing his grace, his love, his forgiveness, his healing, and his justice.  Jesus is alive and well whenever a stranger is welcomed, a child is loved, a friend is forgiven, a patient is healed, an injustice is made right.

The hymn “Christ Is Alive!” which we will sing at the end of today’s service was written by a pastor named Brian Wren for Easter Sunday 1968, just 10 days after the Rev. Dr. Martin Luther King Jr., was assassinated.  Wren wanted to acknowledge this terrible loss while also proclaiming the resurrection of Jesus.

“Christ is alive!” he wrote.  “Let Christians sing.  The cross stands empty to the sky.  Let streets and homes with praises ring.  Love, drowned in death, shall never die.”  Yes, a terrible crime had been committed on the cross.  An awful injustice had been done.  But now the cross was empty, and love would never die.

The hymn makes clear that Jesus’ resurrection is not stuck in history but is a reality in every age for all people.  The risen Christ, says Brian Wren, is “saving, healing, here and now, and touching every place and time.”  Jesus comes into contact with human suffering whenever and wherever suffering is experienced.  In the face of today’s racism and violence, Jesus “suffers still, yet loves the more.”  The hymn ends with the good news of “justice, love and praise.”

Truly, Jesus is not dead in the tomb.  Instead, he is found in his followers who act with justice, love, and praise.  Open your eyes, and see that Jesus is alive and well in you, and in the people around you.

Finally, we are challenged to look to the future, not to the past.  Our risen Lord Jesus is not simply with us — he is ahead of us, always ahead of us, calling us into the future that he is preparing for us.  Our job is to figure out where Jesus is leading us, and to follow him there.

The vicious cycle of negativity fuels our anxiety.  “Our minds are wired to look out for threats,” says Dr. Amelia Aldao, director of Together CBT, a clinic that specializes in cognitive behavioral therapy.  “The more we [fixate on] those dangers, the more we get sucked into them, the more anxious we get.”  But what if we replace the vicious cycle of negativity with a virtuous cycle of resurrection faith?  What if we turn away from the fears and anxieties and what appear to be looming problems and look instead for possibilities?  This is what Jesus was doing by moving ahead of his disciples to Galilee, and what he is doing by going ahead of us today.