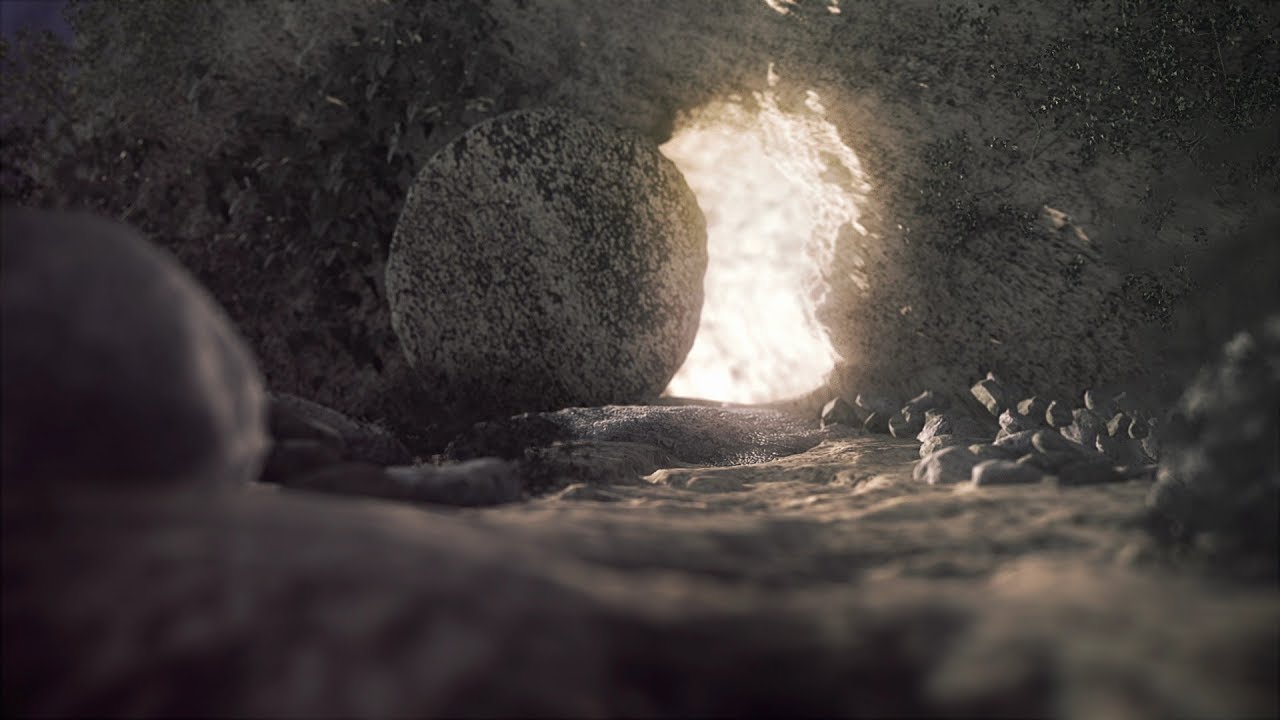 Our live, hybrid service will be broadcast from our YouTube channel at 10:00 a.m. and can be accessed here.

Today, the sixth Sunday in the season of Lent, is a special day in the life of the church.  In some traditions it is called Passion Sunday because it marks the beginning of Holy Week when we turn our attention to Jesus’ suffering.  Here at Calvary, we always end this service by singing When I Survey the Wondrous Cross, which is our way to pivot towards Maundy Thursday and Good Friday.  But today is also Palm Sunday, so named for the “leafy branches” that people cut in the fields and placed on the road in front of Jesus as he made his way into Jerusalem one last time (Mark 11:8).  It’s the day we think of crowds shouting “Hosanna” and Jesus entering the Holy City in triumph, hailed as “the one who comes in the name of the Lord!” (v. 9).  It is a day of celebration, with people cheering the One they hoped would usher in “the kingdom of our ancestor David!” (v. 10).

What we usually don’t think about is the colt that Jesus rode into Jerusalem, described in Matthew’s gospel as “the foal of a donkey” (21:5) and in John as “a donkey’s colt” (12:15).  And that’s a shame.  Because today could easily be called “Donkey Sunday.”

Unfortunately, donkeys have “a bad reputation,” says archaeologist Fiona Marshall. “They’re considered stupid, and stubborn and lowly.”  But this is both unfair and inaccurate.  Donkeys are “extremely intelligent,” she says. “Whole trade routes were built on donkeys, and the wealth of ancient Egypt depended on them.”

It was the donkey that traders used to get all the way from the Middle East to China.  And in the Tang Dynasty, high-class women played a game like polo, in which players rode donkeys instead of horses.  When one particular noblewoman died, she had donkeys sacrificed and buried with her, so that she could continue to ride them in the afterlife.  Stupid, stubborn and lowly?  That was not the reputation of donkeys in ancient China.

Jesus knew what he was doing when he made his preparations to enter Jerusalem.  He sent two of his disciples ahead of him, saying, “Go into the village ahead of you, and immediately as you enter it, you will find tied there a colt that has never been ridden; untie it and bring it” (11:1-2).  Jesus was taking his chances with an unbroken colt, but he knew that the animal was intelligent, not stupid.

Predicting that the two disciples would encounter resistance, he told them, “If anyone says to you, ‘Why are you doing this?’ just say, ‘The Lord needs it and will send it back here immediately’” (v. 3).  This was a pretty shrewd move on Jesus’ part.  What better way to ensure that a crowd would be gathered for your arrival than to get people talking ahead of time.  So, he had his followers spread the word that the Lord needed a donkey which created a buzz in the village, stoked people’s curiosity, and injected some suspense.

Sure enough, the disciples went into the village and found a colt in the street, just as Jesus predicted.  And as they were untying it, people confronted them, just as Jesus said they would.  When they told them what Jesus had said, the people allowed the disciples to take it.  And the donkey itself was cooperative, not stubborn (vv. 4-6).

The disciples brought the colt to Jesus and threw their cloaks over its back, so that Jesus could mount it and begin his ride toward Jerusalem (v. 7).  It might seem to us that the gospel writers make a rather big deal about a quirky detail of this trip into the city, but Jesus knew that the prophet Zechariah had foretold that the coming ruler of God’s people would arrive in Jerusalem in just this way: “Lo, your king comes to you,” said the prophet; “triumphant and victorious is he, humble and riding on a donkey, on a colt, the foal of a donkey” (Zechariah 9:9).

In ancient times, it was customary for leaders to ride donkeys in civil processions and horses in military ones, so a king arriving on a donkey would indicate that he was coming in peace.  Jesus remembered that Solomon had been riding a donkey when he was recognized as the new king of Israel (1 Kings 1:33). The donkey was noble, not lowly.

Mark tells us that many people “spread their cloaks on the road, and others spread leafy branches that they had cut in the fields” (Mark 11:8).  But what were these leafy branches compared to the beast that Jesus was riding?  The animal was intelligent, cooperative, and noble — a heroic donkey!  So, yes, today could be called Donkey Sunday rather than Palm Sunday.

Then the people “who went ahead and those who followed were shouting, ‘Hosanna!  Blessed is the one who comes in the name of the Lord!  Blessed is the coming kingdom of our ancestor David!  Hosanna in the highest heaven!’” (vv. 9-10).  Jesus fulfilled the prophecy of Zechariah by entering Jerusalem as the ruler of God’s people, humble and riding on a donkey.  And after riding the animal to the temple, he went out to Bethany with his disciples.  Along the way, he made sure that the colt was returned to its owner.

Jesus made a conscious decision to ride a donkey, not a horse.  “Horses are speedy,” writes Christopher McDougall, “but when it comes to steadiness, stamina, and heroic resistance to heat, cold and thirst, you can’t do better than a burro.” McDougall is not surprised that people of all stripes—prophets, Mary, Jesus, King Solomon, Muhammad, and even Queen Victoria—have made donkeys their favorite form of transport.  Even George Washington, who was described by Thomas Jefferson as “the greatest horseman of his age,” was actually a donkey guy.  When King George of Spain gave a pair of burros to Washington, he turned them into America’s only breeding herd.  Burro, in case you were wondering, is simply the Spanish word for donkey.

McDougall became a fan of the animals when he entered a donkey named Sherman in a burro race in Leadville, Colorado.  Yes, a burro race.  This compete-tion goes back to the days when miners would race one another over the trails with their donkeys at their sides.  In burro races, competitors don’t get on top of their donkeys, as Jesus did.  Instead, they run alongside them, sometimes for 23 miles, over peaks as high as 13,500 feet.  Win the race, McDougall writes, “and walk away with $500.  Assuming you still can.”  Walk, that is.  For McDougall and a group of rag-tag runners, Sherman turned out to be an inspirational animal, a donkey with the heart of a hero.

So, what does Donkey Sunday teach us about being a person who carries Jesus into the world?  Because that is our challenge, when you think about it.  Although we don’t act as pack animals, we do carry Jesus forward in the decisions we make and in the actions we take.

Like donkeys, we make our decisions with God-given intelligence.  Francis Collins, director of the National Institutes of Health, is a widely respected physician and geneticist.  He led the Human Genome Project and has been very involved in dealing with the coronavirus pandemic over the past year. Collins is also a deeply committed Christian who has worked hard to find harmony between science and biblical faith.

A journalist recently asked him about what he hoped Christians would understand about science.  He answered, “Think of science as a gift from the Creator.  The curiosity that we have been instilled with to understand how the universe works can inspire even greater awe of the Creator.  This gift could hardly be a threat to God, the author of it all.  Celebrate what science can teach us.  Think of science as a form of worship.”  Collins believes that we should all make our decisions with God-given curiosity and intelligence.

On Donkey Sunday, we can also take actions that are cooperative, rather than adversarial or territorial.  This means working alongside our neighbors to serve a world in need, without constantly competing for resources, power, or influence.  It is true that we can and should be committed to the foundations of our faith, holding fast to our belief that Jesus “suffered under Pontius Pilate, was crucified, died, and was buried,” as the Apostles’ Creed puts it.

But being committed to the core tenets of our faith is not the same as being stubborn.  We can work alongside people of different faiths, as well as people of no faith, to work for racial justice or for equitable access to medical care and education or to feed the hungry.  A Christian named Greg Damhorst tells the story of a campus event in which he packaged meals for Haiti.  The event was planned by an evangelical Christian, a Catholic, a Buddhist, a Hindu, and a Humanist.  “In a single weekend,” he reports, “5,112 volunteers from every walk of life, faith and philosophical tradition passed through that site to lend a hand.  In less than 12 hours, 1,012,640 meals were packaged for shipment to Haiti where they were protected by the 82nd Airborne and distributed by Salvation Army humanitarian workers.”

This event was a story “of coming together,” he says, “a story of cooperation … a story of interfaith work.”  Joining together in a cooperative mission, no one felt the need to debate or defend the Apostles’ Creed.

In addition to intelligence and cooperation, lastly, we serve the Lord as people with God-given nobility.  Like the donkey who carried Jesus, we can walk through the world with confidence and grace.  “You are a chosen race,” said Peter in his first letter, “a royal priesthood, a holy nation, God’s own people.”  As God’s royal people, you should hold your heads high and never feel that you are second-class citizens in this world.  But this holy, regal standing is not intended to make you feel superior to others.  Instead, it is a status designed for service, “in order that you may proclaim the mighty acts of him who called you out of darkness into his marvelous light” (1 Peter 2:9).

Intelligent, cooperative, noble.  Those are the characteristics of the heroic donkey. And also the qualities of Christians who want to carry Jesus forward in everything they think, do, and say.